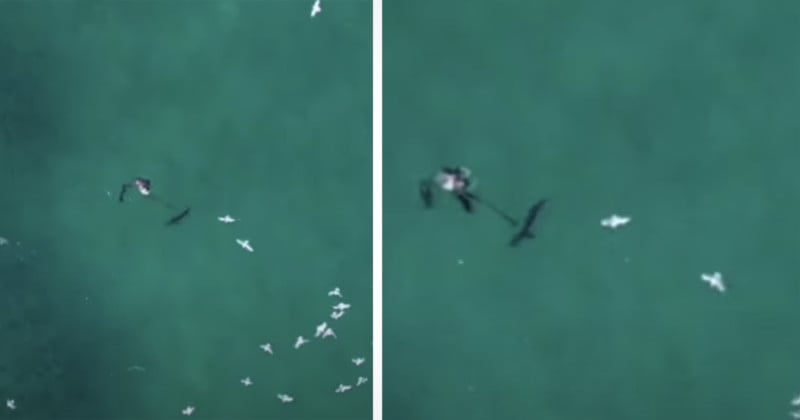 Amateur drone pilot and photographer Matt Woods was sitting on his balcony in Bondi Beach, Australia and decided to send out his Mavic 2 Zoom to perhaps capture an ocean vista, but instead found a spearfisherman grappling with what appeared to be an aggressive mako shark.


In an interview with the Daily Mail, Woods says he was horrified to see the shark lunging towards the swimmer, who was only able to keep it at bay with a spear gun.

“I spotted the shark straight away as there was a big bait ball of fish and as I got closer I could see it was also circling the diver in the water,” Woods says. “The diver was fending the shark off and poking it with his spear gun. The shark then went after his float that is attached to the diver. He was charging it and trying to bite it, thrashing it about.”

Woods and his girlfriend immediately alerted local lifeguards to the situation and continued to monitor the swimmer on his drone. He says he was very concerned for the diver as the shark looked angry and aggressive, and he maintained his drone on the position to monitor the diver so that he would be able to guide help to his location while his girlfriend spoke with lifeguards.

Woods says it took about 30 minutes for lifeguards to clear the area of surfers and swimmers before they were able to arrive by jet ski and scare away the shark. Woods says that the diver appeared to be able to scrable onto the rocks and reef, and lifeguards were able to extract him.

“I was pretty concerned for the diver as the shark looked angry. I’ve never seen anything like it before, only whales. I always seem to miss sharks. We know there are sharks here all the time but nothing like this,” he continues.

“I went looking for the diver after trying to try and meet him but couldn’t find him,” Woods says.

According to records, there have only been nine recorded attacks on humans by mako sharks since 1580 and only one of those was fatal, which would make the situation seen in the video extremely rare. That said, positive identification of sharks is very difficult as victims rarely make adequate observations during attacks — as to be expected. The mako is often blamed for shark attacks due to its size, speed, and capability of causing injury, though mako sharks will not generally consider humans to be prey. The Daily Mail writes that sometimes mako sharks are attracted to spearfishermen if they are carrying dead fish, though it is not clear if that was the case here.

This is the latest in a few notable cases involving drones and sharks. In October of 2020, a drone captured an extremely close encounter between pro surfer Matt Wilkinson. In 2019, photographer Dan Watson noticed a shark in the water coming extremely close to his family.