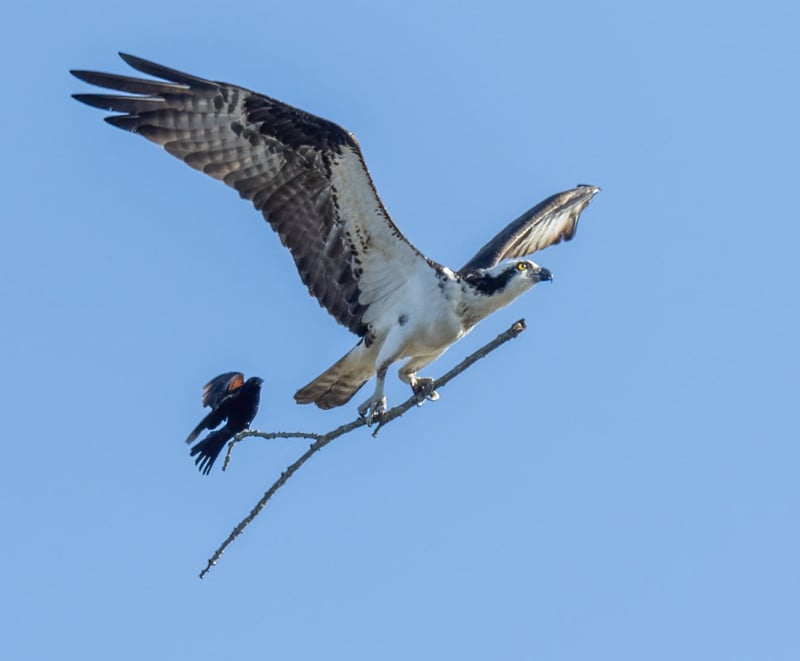 A wildlife photographer in Michigan has captured a strange once-in-a-lifetime shot of a small bird catching a free ride on a larger bird’s stick.


Photographer Jocelyn Anderson was recently photographing an osprey (AKA sea hawk) at a pond when the curious encounter occurred.

“I’m a wildlife photographer in southeastern Michigan that is a big fan of birds,” Anderson tells PetaPixel. “I recently watched an osprey flying along the far edge of a pond and noticed that the osprey had picked up a follower, the red-winged blackbird.

As Anderson kept her lens focused on the two birds, she watched the smaller bird go on the offensive against the larger one.

“Red-winged blackbirds are fiercely defensive of their nests and will attack much larger birds in order to keep their young ones safe,” the photographer says. “The osprey was carrying a large stick for nest renovations, and as the pair flew closer I could see the blackbird weaving and calling at the osprey.

“At one point the Blackbird looked like it landed on the large stick, taking a rest from all its maneuvers. I was surprised at how far the blackbird followed the osprey from its original nesting location — maybe it was enjoying the free ride!”

Perhaps this was the beginnings of a new bird ridesharing service, or maybe the birds were doing their best to reenact a scene from the movie Kiki’s Delivery Service:

“I try to get out as often as I can to take pictures; you never know what will happen on that day,” Anderson stated in a 2018 interview with GlaszArt. “I’m always looking to learn more about nature as I find my photos improve the more I learn about my subject.”

News, Spotlight
lucky, onceinalifetime, strange, unexpected, wildlife
Related Articles
Discussion
Trending Articles
Crocodile Dad Gives Over 100 Babies a Ride on His Back
May 15, 2022
Great Grey Owl Lands on Wildlife Photographer’s Camera
May 11, 2022
Billions of Fireflies Light Up Indian Tiger Reserve
May 14, 2022
Camera Films Itself Getting Launched Out of a Centrifuge at 1,000mph
May 07, 2022
Ukrainians Say Russia is Still Tracking Their Drones with DJI AeroScope
May 13, 2022