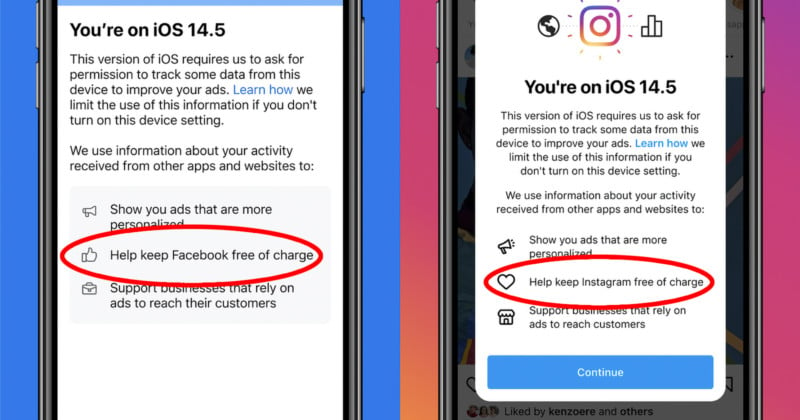 Facebook and Instagram have been vocally against any attempts to curtail its apps from tracking users, but with the launch of iOS 14.5, the company has taken that up a notch by subtly threatening to charge its users for access to its networks if they choose to turn app tracking off.

A major part of Facebook and Instagram’s business model is smart advertising, and it gains those “smarts” by tracking what its users are interested in. If you’ve ever noticed that you receive advertisements on Facebook because of something you were browsing on a shopping site, this is why. However, Apple’s latest update to iOS has new opt-in requirements for users that ask developers to get express consent from device owners before they allow their Identifier for Advertisers (IDFA) to be collected and shared across apps. If a user were to decline to opt-in, advertisements would lose their ability to track a user and provide targeted advertising.

According to The Verge, app developers are still able to use other information a user provides for targeted advertising even if they opt-out of letting the app track their browsing habits across different apps, but that information is limited and can’t be shared with another company for ad tracking.

In short, this update is a boon for privacy but is hugely detrimental to Facebook’s business model. Facebook ads are successful because they can very specifically target users who are already interested in those products, which dramatically improves the likelihood that someone will make a purchase. Without that tracking data, Facebook ads will be flying blind which will very likely result in ads that have dramatically reduced performance.

The Verge also notes that if a developer tries to get around the opt-in requirement or try and replace the IDFA with another piece of identifying information, the app will be considered in violation of Apple’s policies.

Because this would hurt the company so much, it’s no surprise that Facebook has begun to wage a campaign against the feature. It was already outspoken against it before the launch of iOS 14.5, but any user who upgrades to the new operating system and opens either Facebook or Instagram will be greeted with the notice below: 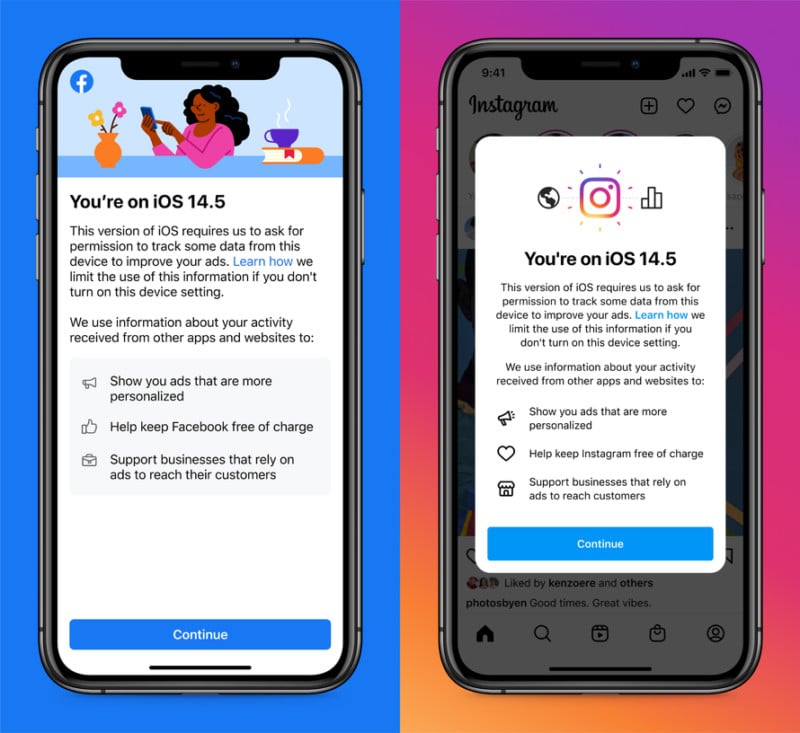 Facebook and Instagram are essentially threatening users to expect to have to pay for access to its platform if too many people choose to block ad tracking. Facebook refers to these notices as “education screens” where it provides “more details about how we use data for personalized ads,” according to the blog post by Dan Levy, Facebook’s vice president for ads and business products. The company also published a detailed blog where it frames its stance as “speaking up for small businesses.”

It is not clear if Facebook or Instagram’s platforms would be able to successfully charge for access.

“Apple has every incentive to use their dominant platform position to interfere with how our apps and other apps work, which they regularly do to preference their own,” Zuckerberg said in Facebook’s January earnings call. “This impacts the growth of millions of businesses around the world, including with the upcoming iOS 14 changes.”