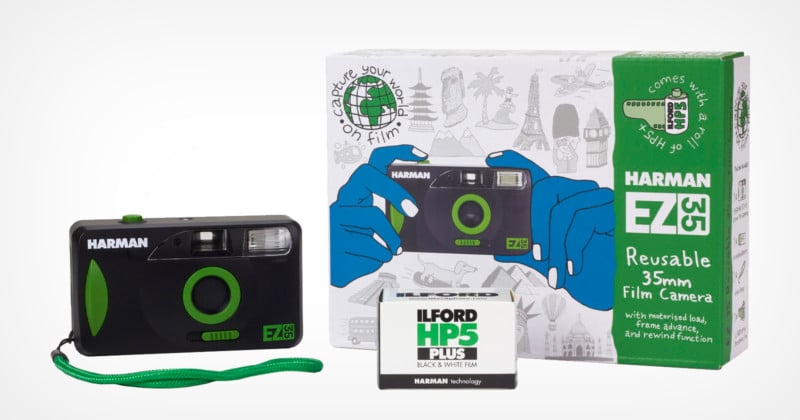 Harman Technologies, the company that manufactures Ilford-brand film, has announced the EZ-35 camera in what appears to be a nod to the days of film point-and-shoots.

The Harman EZ-35 looks similar to the classic disposable film camera but has a few features that make it superior. First, it is reusable which is not only more environmentally friendly but also allows the photographer to experiment with different types of 35mm film (though Harman recommends ISO 400 film). At purchase, the EZ-35 comes with a roll of Ilford HP5 Plus with 36 exposures.

The Harman is also motorized, which allows for automatic load, frame advance, and rewind functionality. The rest of the package is pretty basic, as it need not be particularly complicated. It features a “focus-free” 1 meter to infinity 31mm f/11 lens, a fixed 1/100s shutter, an over-the-lens viewfinder with 70% field of view, a built-in flash with a 15 second recycle time, and a lens cover that also acts as a shutter lock to prevent accidental exposures. 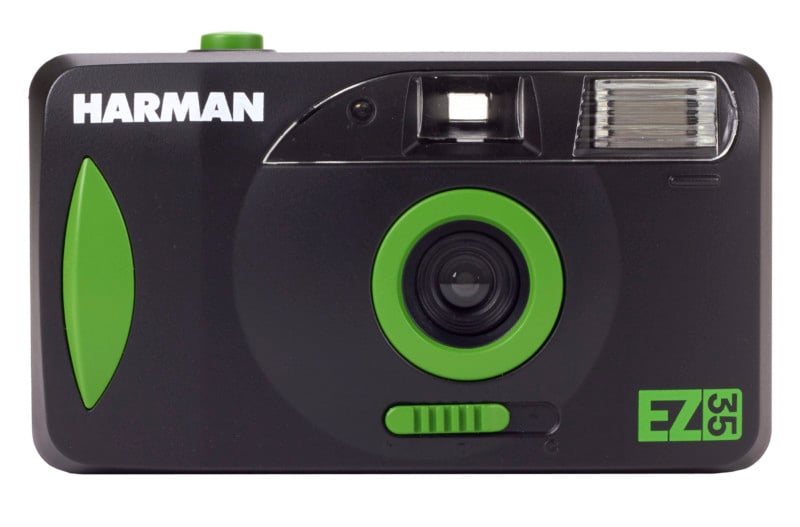 Introduced at a time where new cameras can take over a thousand words to scratch the surface of the features, the EX-35 is pleasantly simple. It’s marketed as a great camera for first-time photographers looking to simply enjoy framing, taking, and developing their own photos before stepping up to something more complex.

For those unfamiliar, Harman Technology is a manufacturer of analog black and white photographic film, papers, and accessories primarily sold under the Ilford Photo brand name. These products are still produced in Mobberley, Cheshire and Harman manufactures raw materials through to “shelf-ready” product on-site and has all the relevant equipment to enable it to be self-reliant in production.

That said, that brand is not to be confused with Ilford Imaging Europe, a separate company that is known primarily for its inkjet materials and has a line of cameras under that name. Harman cameras can’t have that name for brand consistency and legal reasons, hence why the EZ-35 is not an Ilford.

The EZ-35 was launched after the company found success with its original reusable camera that costs just $30. The EZ-35 is a bit more expensive at around $54, but still priced low enough to be a good starting point for new photographers.

These Photos of Fireflies in Japan are Magical

What If The ‘Collapse’ of the Camera Industry Was Based on Flawed Data?