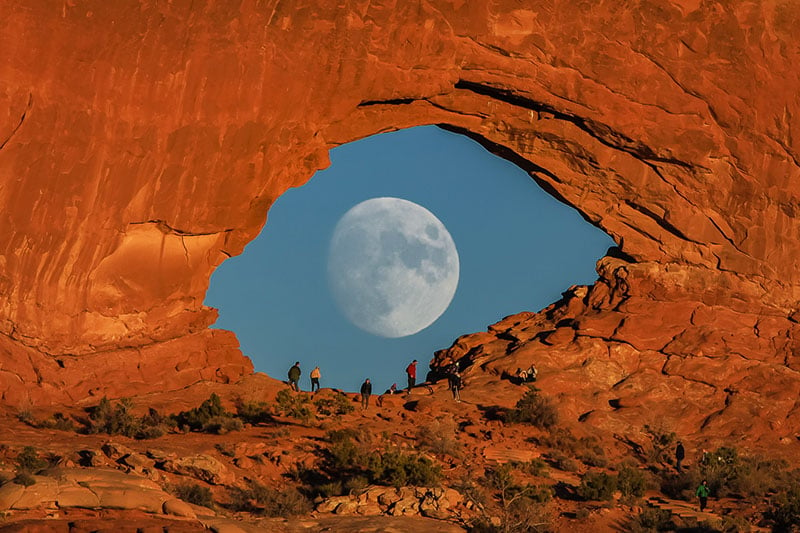 Cooley planned an entire vacation mostly around the fact that the moonrise would align with this arch, and that he could get something resembling a spooky eye on the week of Halloween on October 28th, 2020.

“I planned this shot using multiple apps: PlanIt!,  The Photographer’s Ephemeris (TPE), and PhotoPills,” Cooley tells PetaPixel. “They all allow for figuring out the position of the moon, but each one has different advantages, and I also like to cross-reference for shots like this.”

“It was shortly before sunset, giving the rock landscape a good glow to complement the moon,” explains Cooley. “The moon moves approximately 1 diameter in 2 minutes, so it was about 5 minutes for it to pass through the arch; however, it was only well-centered for about 20 seconds. I shot continuously nearly the entire time, so I have over 250 exposures for its trip through the arch.

“I plan on improving upon the shot but have yet to find a proper alignment and timing within the next two years, but I’m still working on it, so we’ll see!”

Even if you check the moon’s position in different applications, there is no guarantee that you will be in the right place and at the right time. Even a few steps away may make a big difference.

“I started taking an interest in moon photography about eight years ago,” recollects Cooley of the various moon images in his portfolio. “This is definitely the most popular moon photograph I’ve captured, though my personal favorite is one of a couple of my friends on a mountaintop. I like these types of big moon photos because it’s not something people see every day since most of us don’t walk around with binoculars or a telescope.”

Cooley is already planning his next great moon shot.

“I’ve always got various moon photos in the works, but my next major one will be with some red rock formations in Sedona, Arizona,” he forecasts.

Image credit: Photograph by Zach Cooley and used with permission