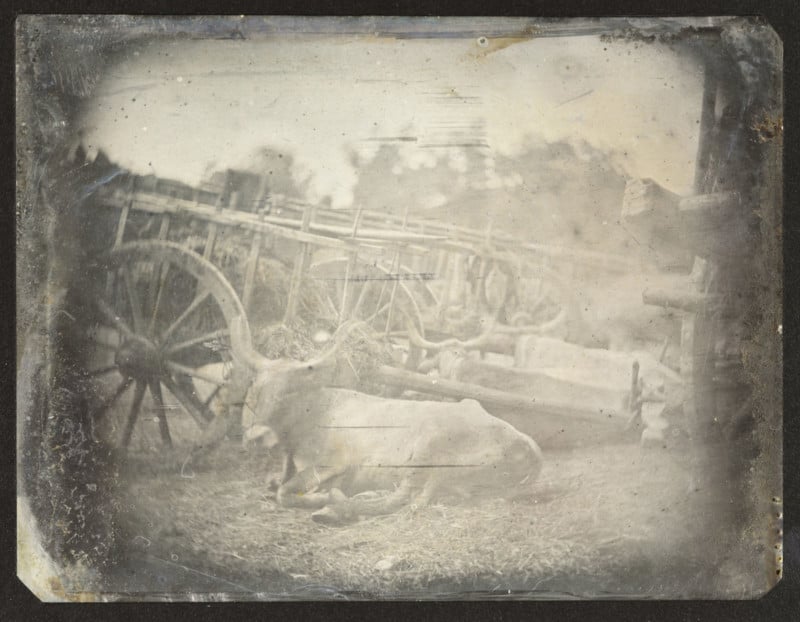 
Hans P. Kraus Jr. Fine Photographs in New York City is running an exhibition through through November 15th titled By Hoof, Paw, Wing or Fin: Creatures in Photographs that “explores some of the ways in which photographers have represented animals over the course of the medium’s history.”

The photo, titled “Rome, Forum, Boeufs,” shows cows reclining by the carts they pull at a forum or market in Rome.

Thanks to the work done by Stephen C. Pinson in his book Monumental Journey: The Daguerreotypes of Girault de Prangey, we know that Girault de Prangey stopped in Rome on a Mediterranean Journey from April to July 1842. And since this is apparently the only time the French photographer visited Rome, the photo can be precisely dated to the four months he was there.

Thus, this photo was almost certainly captured in 1842, just three years after Louis Daguerre announced his daguerreotype process, and “is possibly the earliest firmly dated photograph of any animal,” the gallery states.

The photo is now on display in the exhibition alongside other famous early animal photos.