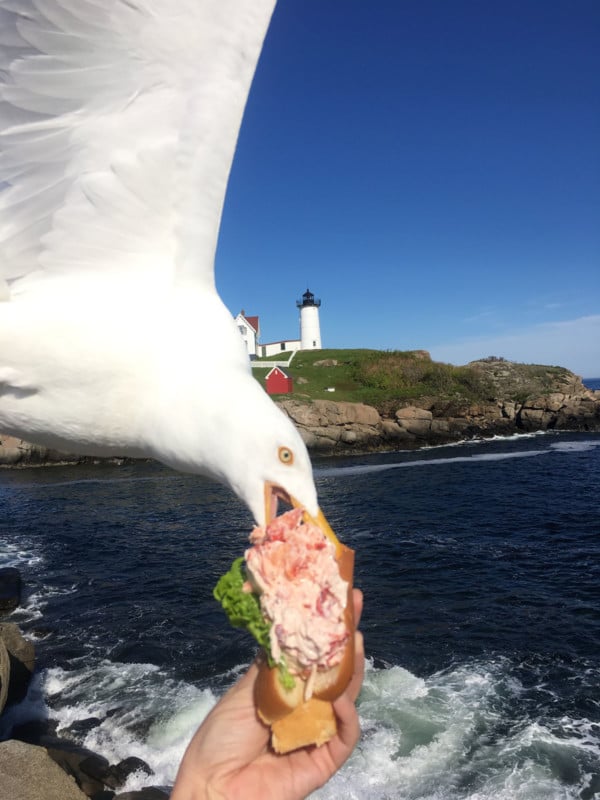 Pepperdine sports law professor Alicia Jessop was visiting Maine from California recently when she stopped by a popular tourist destination for a lobster roll. When she held out the roll to take a picture of it, a seagull swooped in at the exact moment Jessop pressed the shutter.

Jessop was visiting the famous Cape Neddick Light lighthouse in southern Maine on June 7th when she ordered the $21.50 lobster roll from a parking lot lobster shack.

“I wanted a lobster roll because that’s been a bucket list item of mine since I was a kid: to get a lobster roll in Maine,” Jessop tells BuzzFeed News. “I was kind of like figuring out how to hold the lobster roll — Do I hold it long? Do I hide it wide? What angle should the lighthouse be in? — and then I just felt something move the lobster roll. I didn’t even see the seagull coming.”

The seagull caused her sandwich to be scattered everywhere, attracting a swarm of other birds. Jessop managed to capture a perfectly-framed shot of the theft, and she later shared the unusual seagull photobomb picture on her Twitter, where it has been going wildly viral.

This is why we can’t have nice things. I was trying to take a picture of the lobster roll I ordered in Maine and well, this happened 😂🤦🏻‍♀️ pic.twitter.com/N601vpQ41h

She did end up buying and eating a second lobster roll, so she was able to cross off this bucket list item.

$43 and one seagull attack later, I am now enjoying my first lobster roll at Fox’s Lobster House in York, Maine. pic.twitter.com/ZsBFjakcfU

$43 isn’t exactly cheap for a sandwich lunch, but at least Jessop left with a photo and memory for a lifetime.

Image credits: Photograph by Alicia Jessop and used with permission

What Shooting Film Taught Me About Black-and-White Photos