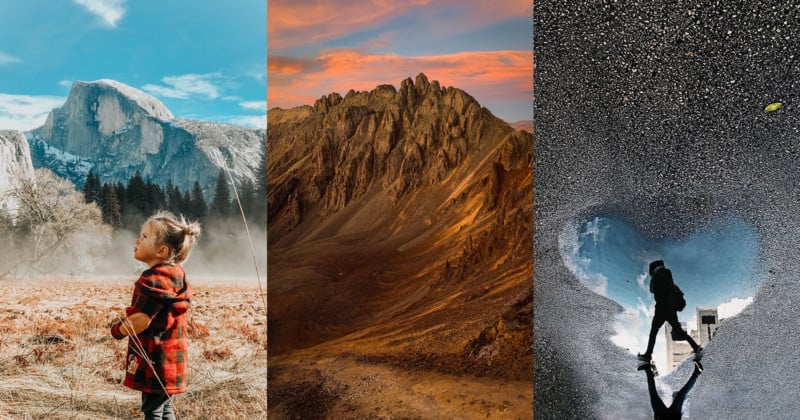 Apple’s “Shot on iPhone” photo contest sparked some controversy back in January over whether it would pay winning photographers to use their photos in ads, but the company quickly clarified that licensing fees would be paid. Well, the contest has ended, and Apple has just unveiled the winning iPhone photos.

Here are the winners along with explanations by select judges on why the photo was picked:

Chen Man says: “This is a photo filled with lovely color and sense of story in the composition. Zooming in, you can see details of each family and their unique touch. The basketball hoop is placed right in the middle of the photo, adding more stories behind the image.”

Annet de Graaf says: “The narrative in architecture. There is actually life behind the surface of an average apartment building in an unknown city. Vivid colors and a perfect composition with the basketball board right in the middle! Great eye.”

Austin Mann says: “This image took a lot of patience and great timing … with the iPhone’s zero shutter lag and Smart HDR, we’re able to see both the raccoon’s eyes and the deep shadows inside the log … something that would have previously been nearly impossible with natural light.”

Phil Schiller says: “The stolen glance between this raccoon/thief and photographer is priceless, we can imagine that it is saying ‘if you back away slowly no one has to get hurt.’ A nice use of black and white, the focus on the raccoon and the inside of the hollow log provides an organic movement frozen in time.”

Phil Schiller says: “A reflection that looks like a painting, two worlds have collided. You are compelled to think about where and how this photo was taken, the bird flying in the corner provides the single sign of life in an otherwise surreal composition.”

Chen Man says: “Distortion and reflection at a strange angle — this photo creates a fantastic feeling.”

Austin Mann says: “I love how accessible this image is: You don’t have to travel to Iceland to capture something beautiful, it’s right under your nose. The way the lines intersect, the vibrant color, the sense of old and new … this is just a great image.”

Luísa Dörr says: “I like the simplicity of this image, the composition, light, details, everything looks good. Then you see one small line that looks wrong and makes me think what happened, where is this place, who was there. For me a good image is not only one that is strong or beautiful, but makes you think about it — and keep thinking.”

Sebastien Marineau-Mes says: “Love how the heart shaped water puddle frames the subject, capturing a glimpse of the world as the subject hurriedly walks past.”

Brooks Kraft says: “A unique perspective and a new take on the popular subject of shooting reflections. I like that the subject is evident, but you are not really sure how the photo was taken. The puddle is the shape of a heart, with nice symmetry of the subject. The depth of field that iPhone has in regular mode made this image possible, a DSLR would have had a difficult time keeping everything in focus.”

Brooks Kraft says: “A portrait that captures the wonderment of childhood in a beautiful setting. Great composition that shows both the personality of the child and the experience in the surroundings.”

Pete Souza says: “Nice portrait and use of background to provide context. The placement of the child’s face is in an optimal place — lining her up so the background directly behind her is clean and not distracting. The setting is a familiar — I’ve probably stood in this exact spot. But the picture is not like any I’ve seen from this location.”

Jon McCormack says: “This image is very well thought through and executed. The background pattern holds the image together and the repeated smaller versions of that pattern in the water droplets create a lot of visual interest. The creative use of depth of field here is excellent.”

Sebastien Marineau-Mes says: “Very unique composition and color palette, playing to the strengths of iPhone XS. What I find most interesting is the background pattern, uniquely magnified and distorted in every one of the water droplets. I’m drawn to studying and trying to elucidate what that pattern is.”

Kaiann Drance says: “Looks like a simple scene but a good choice of using black and white to elevate it with a different mood. Helps to bring out the dramatic contrast in the clouds and the surrounding landscape.”

Luísa Dörr says: “I feel like this landscape was treated like an old portrait. The texture of the mountains evokes an old wrinkled face. Portraits and landscapes are the oldest way of creative representation by humans. There’s something about it that belongs to the realms of the subconscious mind, and this is mainly what appeals me of this picture; the part that I’m not able to explain.”

These 10 winning photos will now be featured on Apple’s billboards (in select cities), stores, and website.