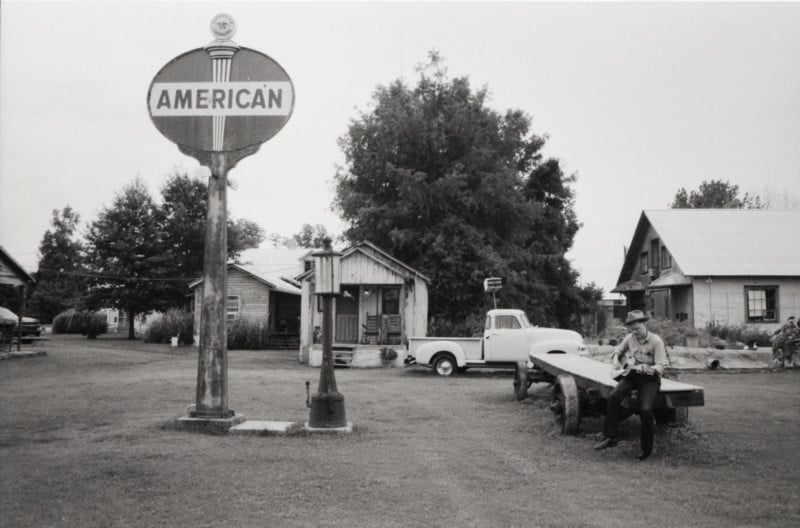 No matter how it looks, this is the story of the photographs I didn’t make this year. On January 1st, 2018 my colleague, the military photojournalist C.S. Muncy, presented me with a gift: a small, handmade box he’d crafted out of salvaged wood. Muncy, a film lover, had given to me, an unquestioning digital-age professional, a box full of 35mm film.

I had not, when handed that lacquered case, touched a single roll of film once in the fifteen years since I first started working as a little puppy photojournalist at Newsday. At the time, their newsroom was in transition from analog to modernity and my first editor, sighing furtively over my portfolio of chromes, told me that my only choice was more or less going to be digital photography or the mailroom. Having an art degree and thus being largely unable to alphabetize things, I went out and got a digital camera, and that was that.

Fast forward a decade and a half, to an era when film is as nearly extinct as the planet we photograph it with, and I open that box to find twelve rolls of Ilford HP5 black and white negative film: seven of 36 exposures, five of 24, a total of 372 exposures to last me one single run around the sun. One for every day, and a week of wiggle room.

I decided, the very next day, that I had only one choice: not an exercise in photography, but in deliberation. Each day of 2018 I was to make one, and only one, photograph on film. I’d have to pick my moments carefully — there’d be no do-overs, no second chances. I knew that at some point an editor, a curator, or a grumpy internet commenter would demand to see my contact sheets. So, I’d have to go through my each and every day watching every moment — an exhausting effort — while trying to decide if that very one would be my found poem for that particular day. 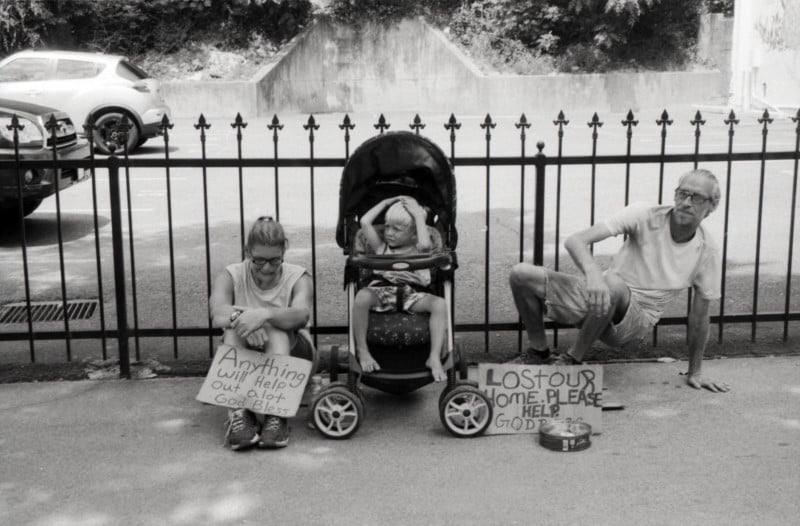 Now, I’ve never been one to think the world always looks better through a cracked rear view mirror. I’ve no real nostalgia for film. This isn’t a note on longing, this isn’t a parable about a letter from an old friend. After fifteen years of shooting digitally, I didn’t even have a camera for this. I had to start by buying an old 35mm body from one of Manhattan’s two big camera dealers. As I’m closely affiliated with Nikon, I was pleased as punch to find an oldish (circa 2000) Nikon N80, even if it was in terrible, just absolutely terrible, condition.

I paid one hundred dollars for it. Turns out I over-paid by ninety-nine. 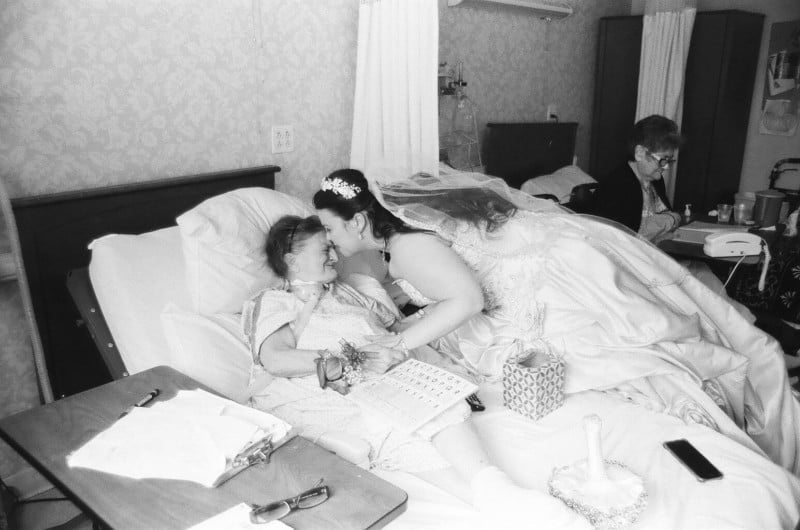 Whoever loved the camera before me loved it two times too much; already looking like a toddler had used it to hammer really big building blocks into even bigger building blocks, the camera died on any given day that was even just a little hot or a little cold, and the meter didn’t work for even one second of the year. So I was stuck facing an entire 365-day orbit shooting with a camera where I’d have to augment my manual focus predilection with a necessity to guesstimate exposures. I felt like Fred Flintstone putting his feet through the floor of his car. Yabba. Dabba. Doo. 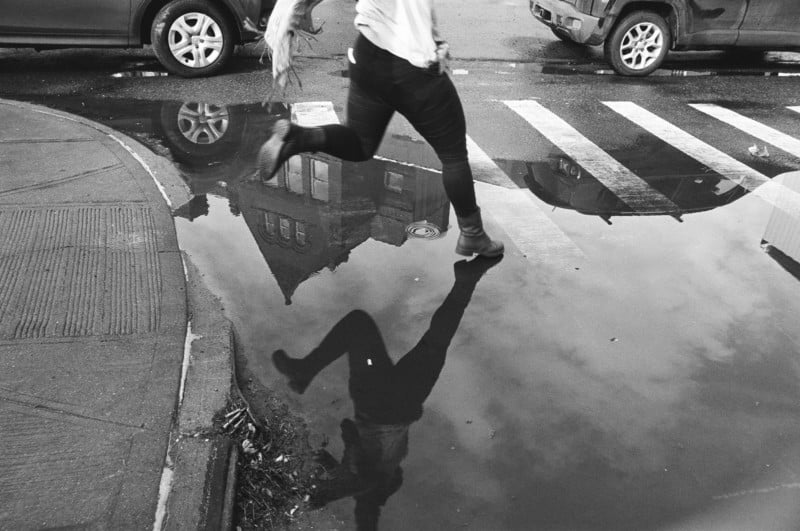 I decided to try and make all my exposures at 1/350th of a second, whenever possible, so that the entire year’s work would amount to just one mere second out of its 31,557,600 total. Within a month, I discovered that I had been thrown, headlong, into one of the most meaningful and meditative experiences of my life. 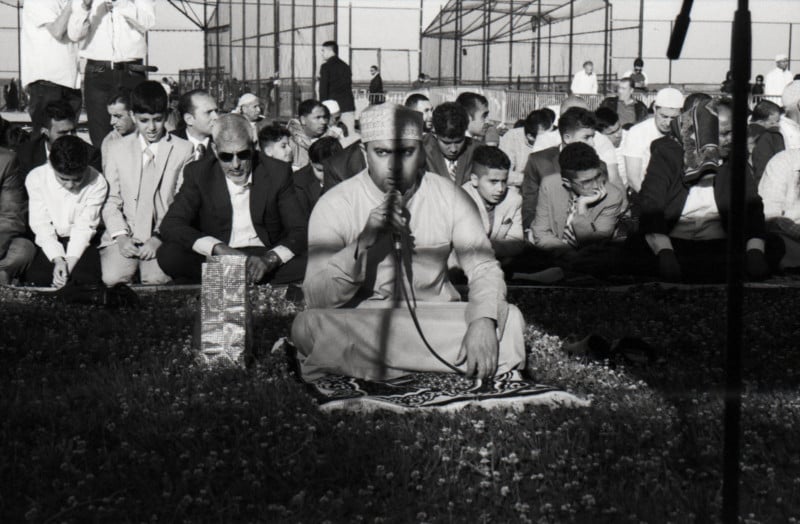 Day in and day out, I was forced to take each and every moment and simultaneously savor and weigh it; was this the best my day would offer? Could I, would I bet that something better was coming? Every day, looking closely, something joyful would wander in, either by chance or by appointment. Stalking around subways and restaurants and my regular working shoots looking like a lion slithering through the Serengeti grass on a quest for gazelle, sometimes I’d catch it, sometimes I wouldn’t.

More numerous still were the (true) occasions when I’d, say, photograph two banal construction workers arguing with one another, click, and then just minutes later witness the far more beautiful, far more interesting scene of two ladies parting, their decades-old love and all its hopes dashed, at the café table next to mine, crying all the while. One day, in the middle of a block I came across an old woman dragging behind her on long ropes two clanging milk crates full of all her worldly possessions, scratching along the pavement in the middle of the street behind her. Click. At the end of that block was a little gas station, where a fellow from the Army was pumping gas… into his armored tank. 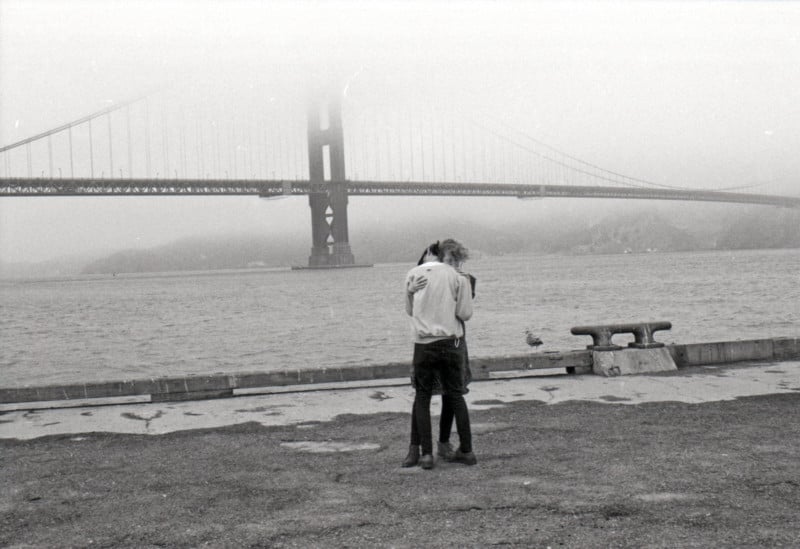 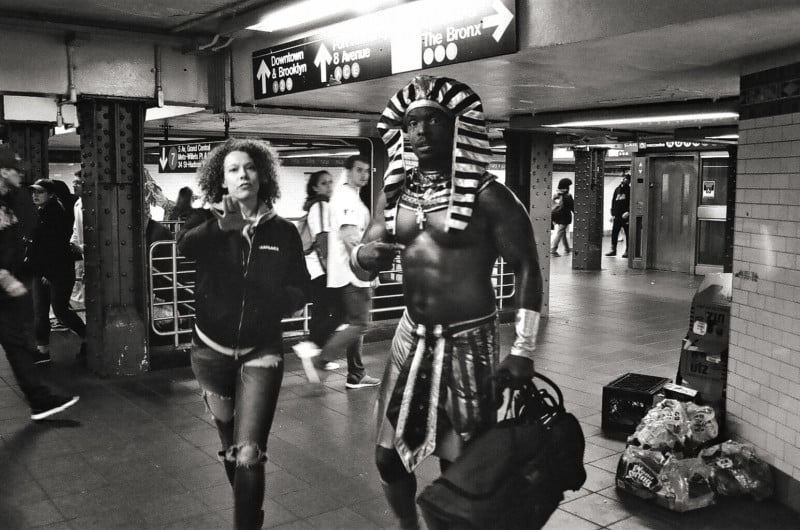 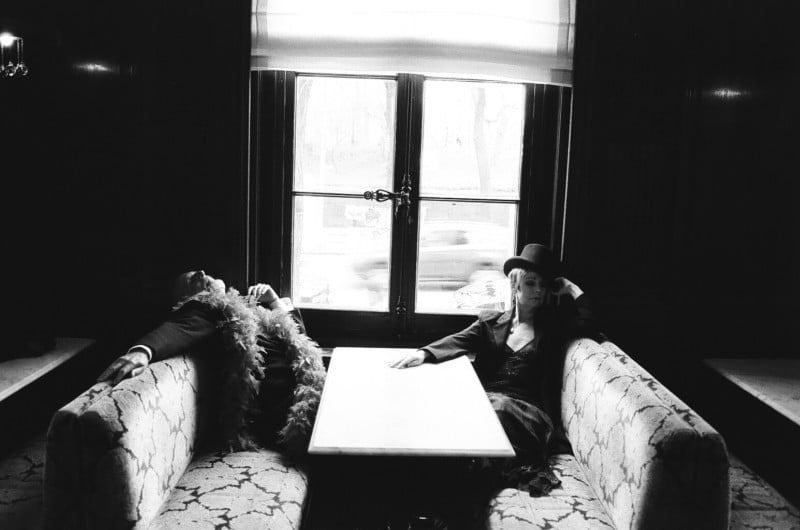 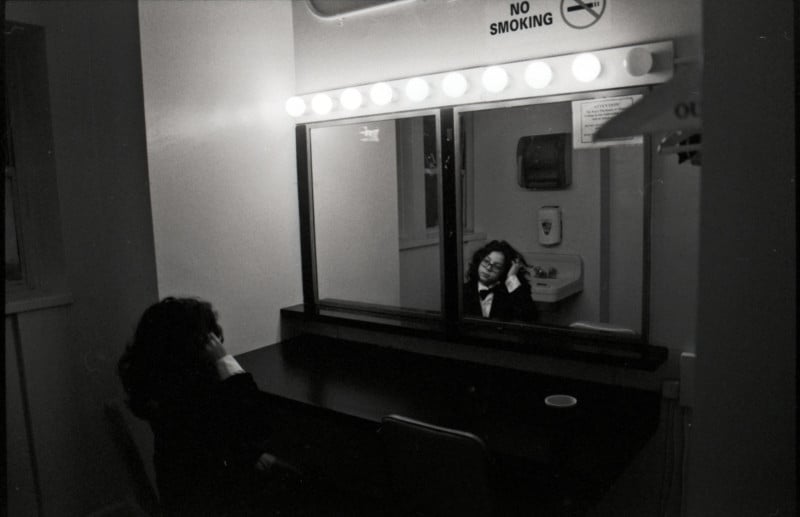 Late at night, I’d sneak into my old college darkroom at Fordham University, ostensibly to develop film and plan out prints. In the end, I would invariably end up sitting in the red darkness of the room, breathing in those oddly nostalgic chemicals, thinking about all the ones that got away — the pictures I’d missed, of course, but more specifically the times I’d been too quick to decide that some moment was the best I’d come across in a city of seven million people, the occasions when I forgot that the next Best Thing, as almost always in life, was right around the corner. 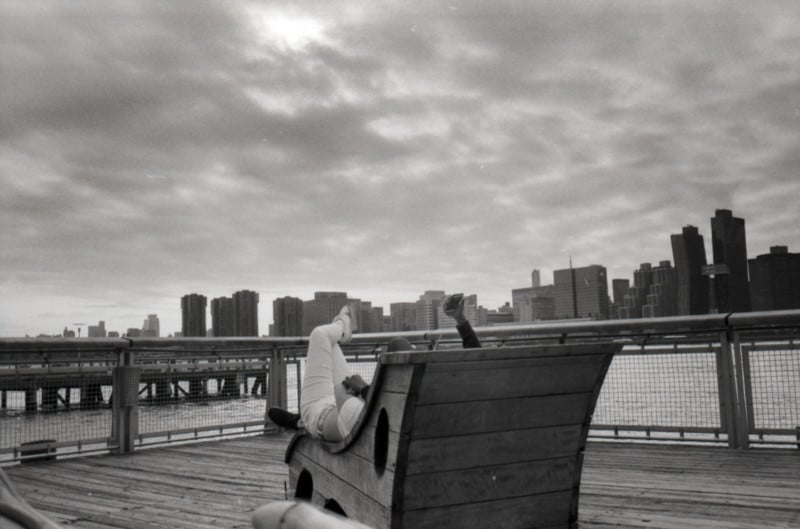 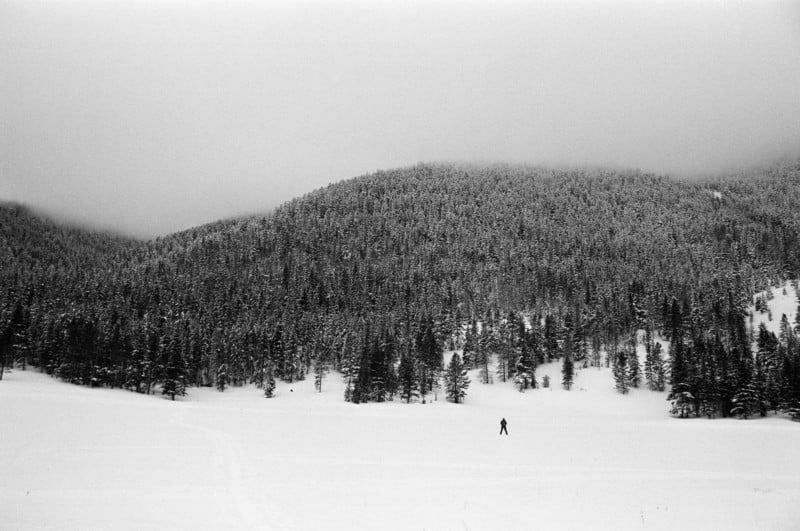 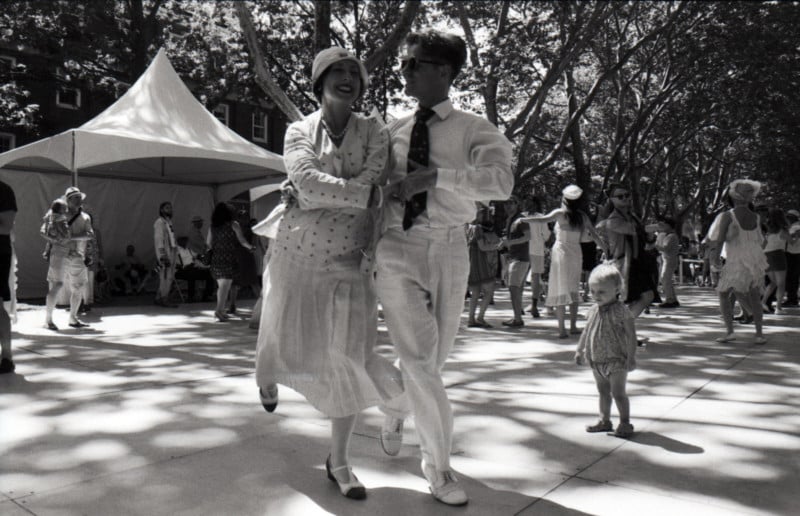 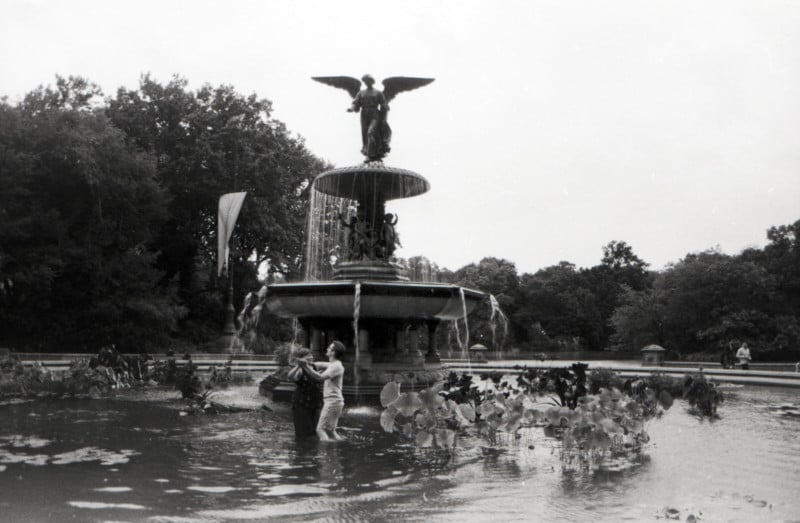 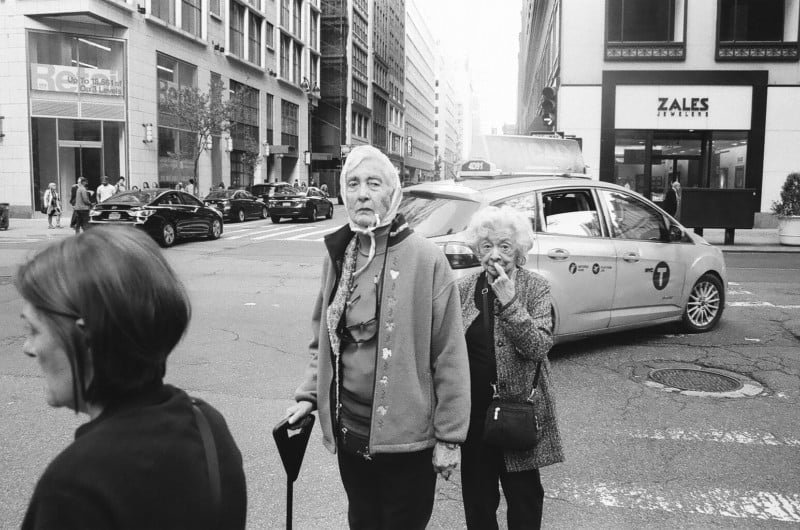 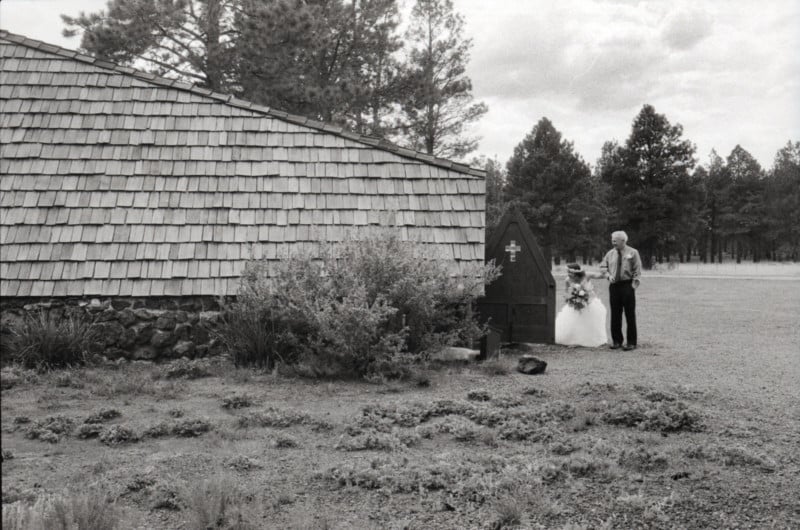 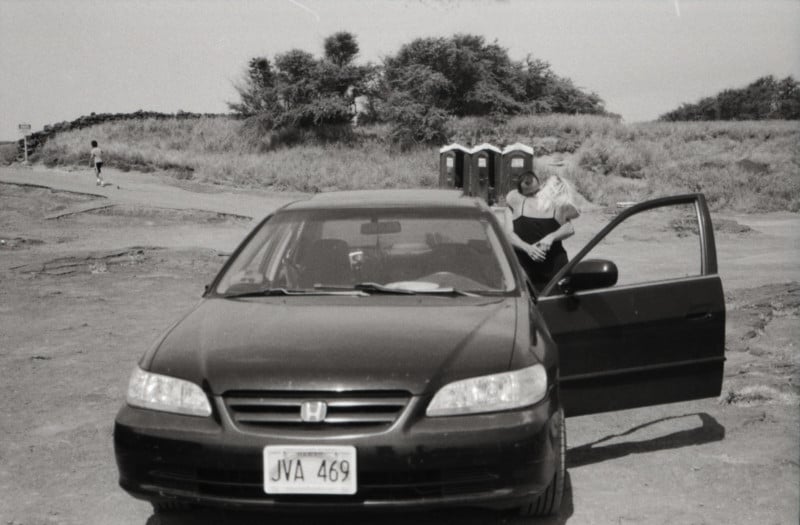 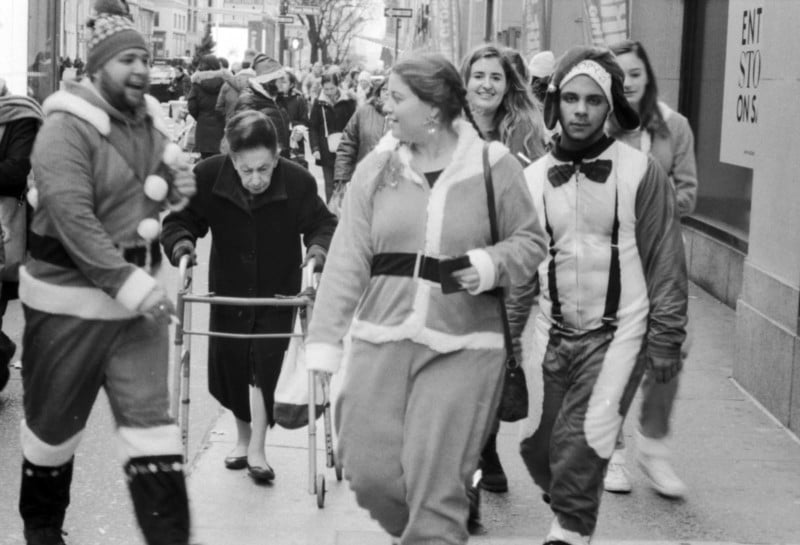 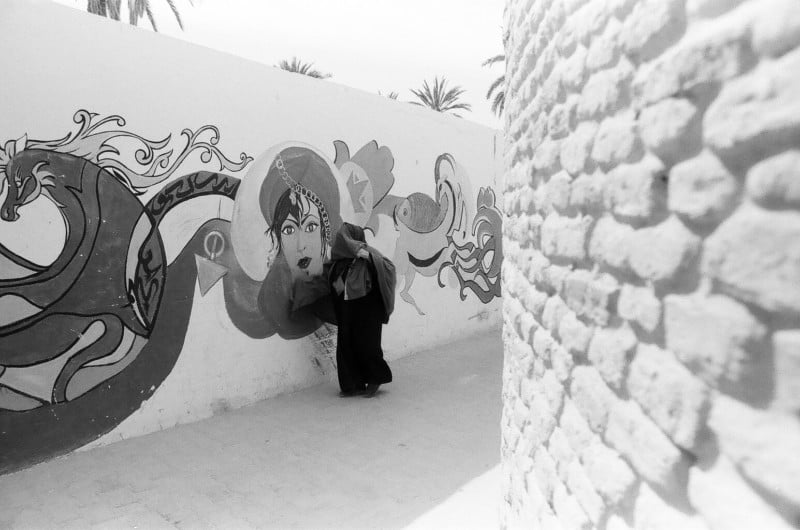 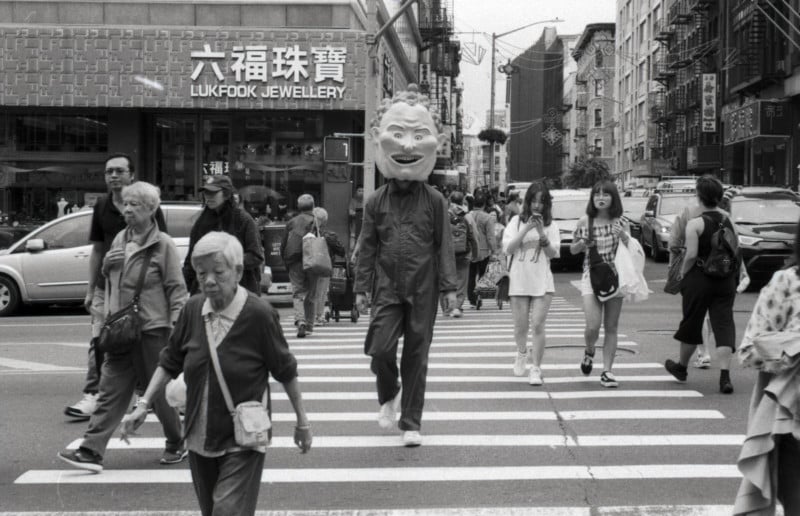 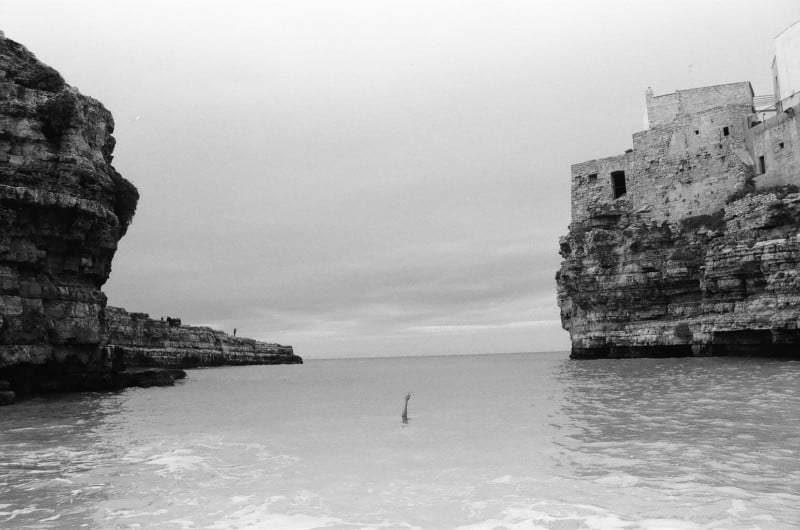 Looking back over a year of work, tossing out the shots that didn’t make the cut — guessed this exposure wrong, waited a second longer than I should have, this fellow is blinking, oh, there’s a lady in the back waving at my camera, what the heck was I thinking here — I can’t help but notice all the little stories that remained from my mundane life, all the little poems that populated an otherwise low, dishonest year in our world.

You can find the 365 film photos of the complete project here.

About the author: B.A. Van Sise is one of the world’s busiest travel photographers and a frequent contributor to the Village Voice and Buzzfeed. The opinions expressed in this article are solely those of the author. In addition to being a Nikon/AFAR travel photography ambassador and a travel photography workshop instructor for Atlas Obscura, Van Sise has been a staffer for Newsday and AOL CityGuide, has been featured on both the cover of the New York Times, on PBS NewsHour, the Daily Mail, and on NPR. A number of his portraits of notable American poets are in the National Portrait Gallery of the Smithsonian. You can find more of Van Sise’s work on his website and Instagram.

ProGrade Digital Unveils Dual SD Card Reader with Speed of Up To 1.25GB/s

Where Mirrorless is Headed in 2019