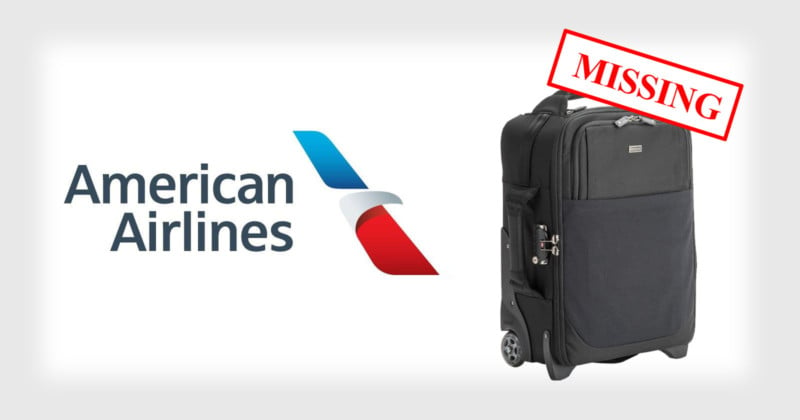 
“I was traveling with a Red Cross producer when we received a text from AA at 4am that our connecting flight from Phoenix to Reagan National Airport was cancelled,” Frankfurter writes. “The ticketing agent for American Airlines in Phoenix was able to book us onto another flight to Chicago O’Hare and from O’Hare to DCA.”

But after flying into Chicago and trying to board the connecting flight, the gate attendant informed Frankfurter that the overhead bins on the plane were full. Frankfurter makes it a point to always carry her camera gear into the cabin.

“I had my gear in a ThinkTank airport bag, intentionally inconspicuous so that it does not attract attention,” Frankfurter says. “The attendant at the gate insisted that we hand over our carry-on bags […] I protested, explaining that the bag contained camera gear.”

After some back and forth, Frankfurter finally gave in, and that’s how her nightmare began.

Here’s her full story through a sequence of Tweets:

I'm an award-winning photojournalist and @AmericanAir lost my cameras, lenses and other equipment worth $13K. Here's what's happening and how @americanair is utterly failing.

On 6/13 I was returning from a photoshoot in Arizona and @americanair bumped me from my flight. Okay, no problem, I'm cool with that. They put me on flt 2481 from @fly2ohare to @Reagan_Airport. I always carry my cameras and equipment with me on board. I never ever check them

But the gate agent would not let me board unless I checked my bag.

I pled with her. She insisted. I argued, explained that the bag contained all of my camera gear and we went back and forth a bit. Against all better instincts, I finally handed over the bag. She said it would be gate checked and swore it would be on the jet bridge when landed. pic.twitter.com/MLL9u1VThD

It never showed up on the jet bridge or baggage claim. And after 5 days of going back and forth with @americanair and baggage handlers at both airports, no one has found it. It took me years to buy this equipment and in a few hours they lost all of it.

I take pictures for a living – refugees, Central American migrants riding on tops of trains through Mexico. Also people celebrating happy things like births and marriages. I don't work for a company. I work for myself. No one is going to hand me new equipment.

Pls retweet and share this and maybe @americanair will pay attention.

Frankfurter says that since this happened last Wednesday, she has been “dropped into a matrix nightmare of AA 800 numbers, call centers, and various agents” who have tried but failed to find her equipment. And her attempts to reach other divisions of the airline have been met with complete silence, she says.

Frankfurter does insure her equipment, but her insurance had lapsed and nothing was covered at the time of this loss.

In addition to shooting weddings, Frankfurter has spent years shooting documentary photography around the world, creating images that have been recognized, published, and exhibited worldwide. In 1995, she won two prizes from the prestigious World Press Photo competition for her long-term photo project in Haiti.

Update on 6/22/18: Jared Polin tells PetaPixel that American Airlines seems to have a policy of only covering $3,500 for lost baggage of certain items domestically.