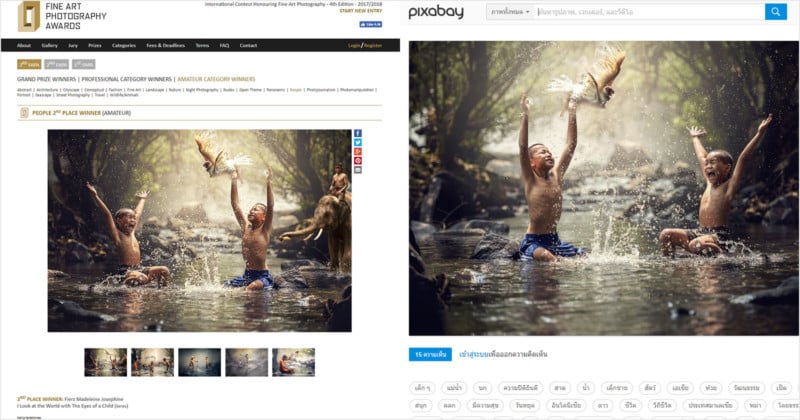 A Swiss photographer has been stripped of two awards after it was revealed that she had submitted a Thai photographer’s public domain photos as her own to win honors in contests.

Khaosod English reports that photographer Madeleine Josephine Fierz had won 2nd prize in the Fine Art Photo Awards this year with a beautiful series of portraits of people in Thailand. She also won an Honorable Mention by converting the photos to monochrome for the Monovisions Photography Awards and submitted her photos to the Moscow International Foto Awards. 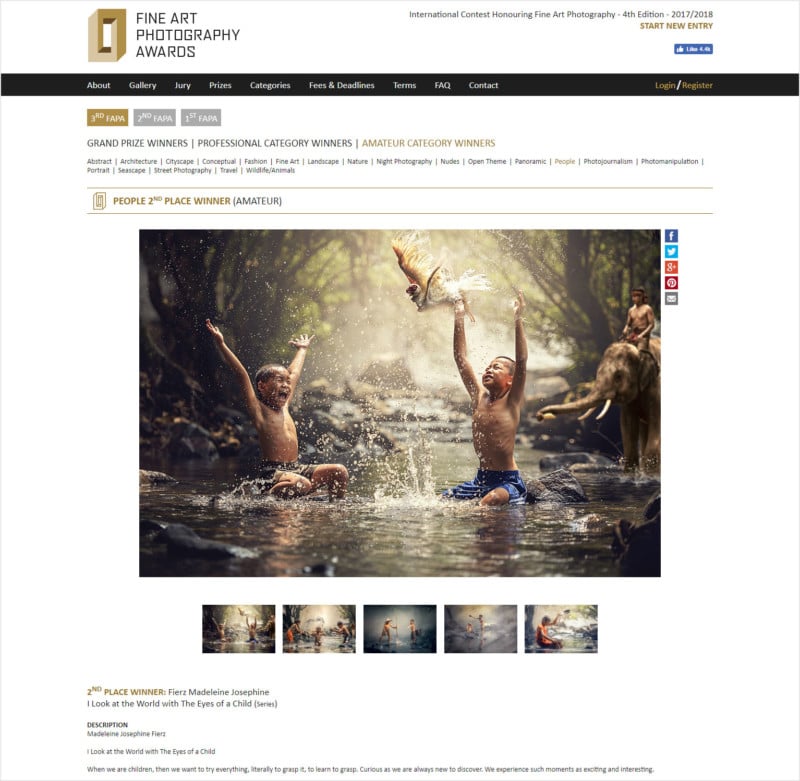 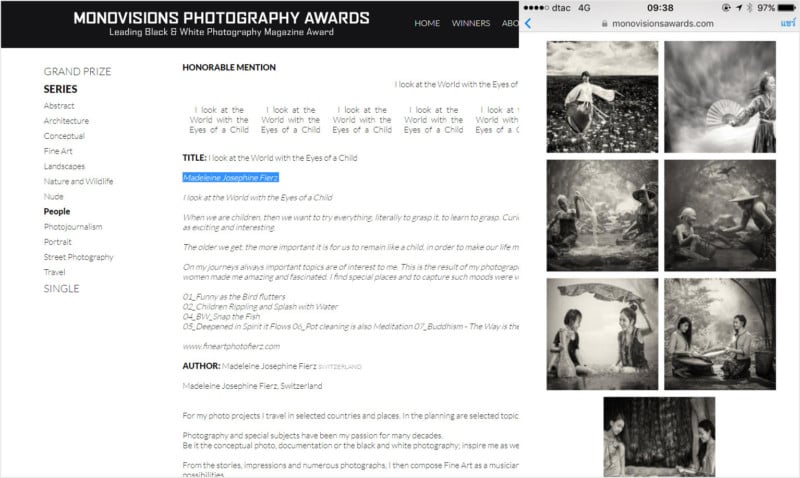 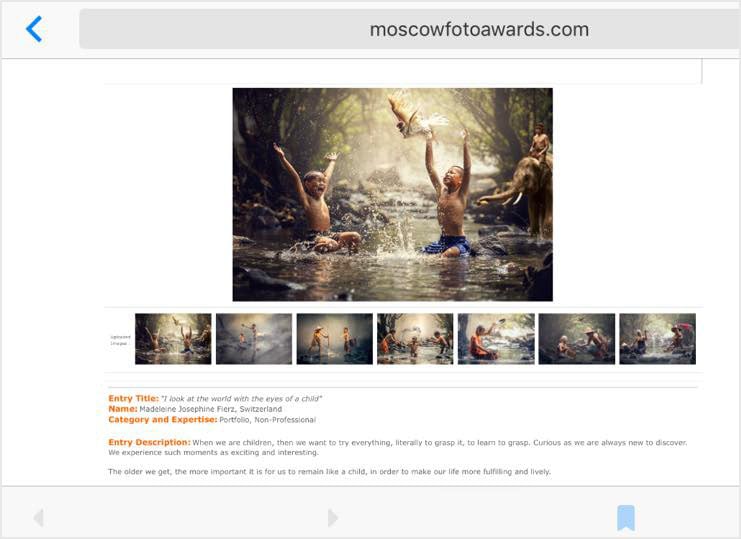 Fierz had entered the series into the contests with the title: “I look at the world with the eyes of a child.” Here’s the description she gave for the photos:

When we are children, then we want to try everything, literally to grasp it, to learn to grasp. Curious as we are always new to discover. We experience such moments as exciting and interesting.

The older we get, the more important it is for us to remain like a child, in order to make our life more fulfilling and lively.

On my journeys always important topics are of interest to me. This is the result of my photographic projects, as in these pictures of Asia. These children and the two women made me amazing and fascinated. I find special places and to capture such moods were very impressive for me.

The photos came to the attention of Thai photographer Sasin Tipchai, who immediately recognized them as his own. Here are a few of Tipchai’s photos Fierz had claimed to be her own:

Tipchai had uploaded the photos to the free photo website Pixabay, where he had designated the images as public domain using the Creative Commons CC0 dedication. Thus, the photos were free to use by anyone for any purposes. But photo contests (and the photography community) still have a problem with photographers submitting someone else’s photos and misrepresenting them as your own. Tipchai posted his discovery on Facebook and received a strong reaction.

“My pictures were used by a foreigner for a photo contest to win an award,” Tipchai wrote. “[…] 99 percent of the portfolio belongs to me.”

After Fierz’s transgression came to light, Fierz was stripped of her prizes and her photos have mostly been removed from contest pages.

“She claimed since she bought these photos, she thought that she could manipulate it a little and claim it as her art,” Moscow contest jury member Hossein Farmani wrote to Sasin in response to his complaint. “As a jury of MIFA we take these allegations very seriously and we investigate and delete images in question as soon as we can verify the facts.

“It’s almost impossible for us to know which images belong to whom unless photographers let us know, like you did.”

Correction: An earlier version stated that Fierz had won 1st prize at the Moscow awards and received prize money from the Moscow and the Fine Art Photo Awards, based on information reported by Khaosod English. Fierz did not receive any top award from the Moscow contest, and while the Fine Art Photo Awards do have a grand prize of $2,000 for the Amateur side, Fierz’s 2nd place category win didn’t earn her any monetary amount.

It has also been pointed out now that Fierz did appear to make various digital edits to the photos prior to submitting them to the contests, from flipping them horizontally to inserting things like elephants and hats into the scene.

Update on 9/7/17: Here’s a statement we received from Fierz.

I have received from the Mifa no USD 3000. This sum is only awarded to the Moscow Professional Photographer of the Year. I am an amateur.

I have received from the Fine Art Photo Awards no grand prize, therefore no USD 2000. From both competitions in 2017 I never received any money. All pictures have been deleted.

Lexar Has Been Acquired by a Chinese Flash Storage Company