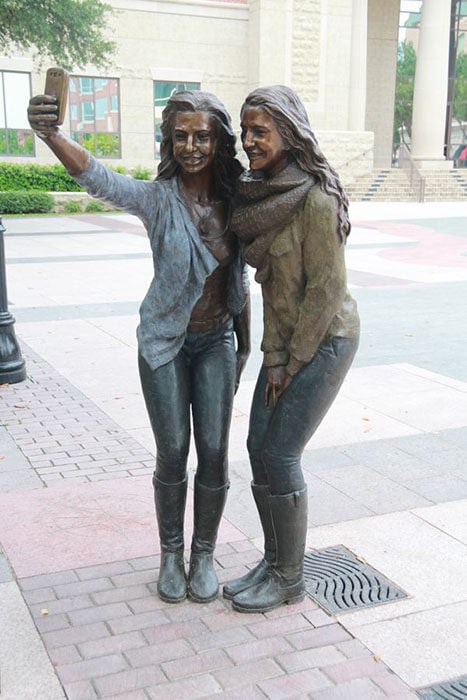 Over in Sugar Land, Texas, a town of about 83,000 people, there’s a strange new piece of public art that has the world talking. Sitting right outside the city hall building is a new bronze statue of two girls taking a selfie.


Sugar Land says the sculpture is part of a 10-piece collection that is being donated by a resident of the city — public art that was approved by citizen committees. The value of the statue (and a second one that was just installed) is estimated to be about $32,500.

It’s a sculpture that shows an activity “common in the plaza,” the city writes.

People are already taking pictures with the statue and sharing them on social media:

Obligatory selfie with the #SelfieStatue in @SugarLandtxgov crazy how many people are out here taking ? ? pic.twitter.com/Ks6OgYzeXK

THERE'S A SELFIE STATUE IN MY TOWN. pic.twitter.com/hEV0MLM04L

Y'all I saw the selfie statue in Sugar Land with my own eyes; it's as ridiculous as it sounds pic.twitter.com/2FF4XQKb7K

Media outlets around the world and Web are also reporting on the unusual installation:

Not everyone is happy about the sculpture, however.

Beyond annoyed. Every generation gets stupider and stupider. Saw this in sugarland, Texas today. pic.twitter.com/O3zjOqtSC8

So is the city of Sugar Land expecting us to take pictures with that statue of 2 girls taking a selfie? I'm embarrassed for everyone.

What's my hometown like? Well they just erected a statue of 2 girls taking a selfie next to city hall sooooooo… https://t.co/k4J2vQRZun

All that damn money they used to build this uglyass statue, and they give them a Galaxy S3 ? #SugarlandSelfieStatue pic.twitter.com/aL59HKo5Iy

So, if you find yourself passing through Sugar Land, Texas, in the future, maybe think about stopping and paying homage to the good ol’ selfie.

(via Sugar Land via Mashable)