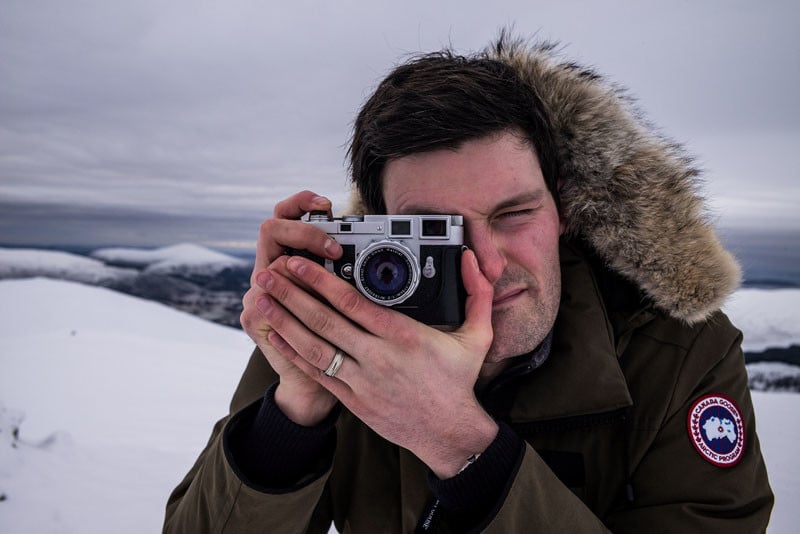 Recently one of my cousins messaged me asking for some camera advice. He was looking for help choosing a new camera and wondered if I had any suggestions. Without wasting any time I started writing back a sort of stream of consciousness response.

I started with the differences and history behind DSLRs and mirrorless cameras. I wrote about size and shape and weather sealing. I covered lenses and the suggested uses for various systems. I reflected on megapixels and sensor sizes and dynamic range and ISO performance. I covered Canon, Nikon, Sony, Fuji, etc… I wrote about zoom lenses vs. prime lenses and the dangers of too much choice. I went on and on.

And then I surprised myself as I wrote that none of that mattered. That all the technical details, all the performance specs and features, all the history and lenses, all of it was completely secondary to the most important feature of a camera: how it makes you feel.

I paused and sat for a moment, fingers lifted from the keyboard. Did I really believe that? Could the most important thing about a camera really have nothing to do with its performance or output? Could how the camera makes you feel really be more important than the pictures it takes?

I’ve thought about this a lot these past few weeks. And I think the answer for 99.9%* of us is a resounding YES.

I’m not sure what the first camera I used was, but my earliest camera related memory is from some time in 1997. I was in grade 3 at the Monterey Aquarium and my dad was scolding me for wasting film on pictures of the turtles. My grandmother was also there and as my dad walked off she said I shouldn’t worry about that, just take the pictures I wanted to.

I was so appreciative of my grandmother in that moment, and subsequently have come to completely understand the concerns of my father. I’m sure the pictures were terrible, but I remember loving taking them.

I got my first real camera in high school. It was a Digital Canon Rebel something or other with a super cheap 18-55mm lens. I thought it was the coolest camera ever. It was big and black and I was sure I looked like I was on assignment for National Geographic as I lugged it around my suburban neighborhood.

My best friend at the time had an equivalent Nikon and together we discovered aperture priority, ISO, polarized filters and more. I remember getting the slightly longer 75-300mm lens.

I felt amazing. I knew that anyone who saw me with that huge lens up front would just know that I was a pro! I don’t know if I got any great photos back then, but in some respects it doesn’t matter. I loved that camera and took it with me everywhere. And everywhere I took it, every day I used it, I learned a bit more about making photos.

When I arrived in Scotland for my undergrad, the Canon came with me. In actuality I think I might have upgraded at some point there to a newer one of the same model, but it didn’t really matter. Same feeling, same sound, same experience.

Alas, as university progressed I found myself leaving the camera at home. Trips back and forth to Canada with luggage allowances and carry-on limits meant I’d often just leave it alone and travel without. Towards the end of my undergrad I went on a number of trips to the Middle East, North Africa, and the Arabian Peninsula.

In 2012, I got married and started my masters. Most of the photos from that year were taken on my iPhone. The Ricoh had been retired to a drawer of tired electronics and the Canon came out when my wife and I would rent a car and go for a trip somewhere in Scotland. But day-to-day I wasn’t really taking any pictures.

At the end of that year I wanted to put together an album for Lauren, but there just weren’t enough photos. At the same time I was looking for a hobby, something non-academic and creative to get into. Lauren suggested I try taking photography more seriously.

So I did my research. I had 3 criteria at the time.

After an extensive and fairly exhaustive search I settled on the Fuji X100S. It was a smallish camera with an aperture ring, a shutter speed dial, and a 35mm equivalent prime lens. I wouldn’t have to make lens choices on the fly as its lens was fixed. I liked the idea of working with one focal length, no zoom, and no alternatives.

Also, I liked how it looked.

I didn’t realize it then, but this would prove one of its best and most impactful qualities.

The camera arrived and I immediately loved it. It was fun to use, made lovely images, and looked great. But it was the last part that turned out to be the most important. Because the camera looked cool and I liked it as much as I did, I started carrying it with me everywhere. Out for an evening stroll with Lauren, the camera would be slung over a shoulder. Quick run for the groceries, the camera would come along too. Off to the library to study, the camera was sat right beside my books. Day trip down to Edinburgh, the camera didn’t even need to go in my backpack, I could just slip it into my jacket. Meeting friends at the pub, the camera was right there next to my pint.

There’s a famous expression in photography, now often used to justify the use of camera phones, “the best camera is the one you have with you.” I completely agree. You can’t make photos if you don’t have a camera, so obviously the best camera is the one that you have on you. However, where this misses the mark is that the camera you have with you could actually be a better camera.

Everywhere I went the Fuji came too. And this lead to some great opportunities. Sometimes it was just everyday shots of a friend over coffee, or Lauren at dinner, but other times it would mean a walk on the beach ended in me taking pictures in the middle of a polo match on West Sands (of Chariots of Fire fame). Later, after upgrading to the Leica M-P (a camera that makes little sense unless you’re really deeply passionate about it), it would mean an evening of catching up with a friend over a pint at the pub would end in some fantastic pictures of the Aurora Borealis.

Most of the time I sling my camera over my shoulder I have no idea if I’ll even end up using it, and quite often I don’t. Rarely now do I go out with the expressed purpose of taking photos. Instead I just go out. Do what I do. And the camera comes with me. Its there just in case.

So this is the most important piece of advice I can give anyone looking for a new camera or anyone wanting to get into photography more seriously. Find a camera you like to look at as much as you like to look through. Find a camera you think looks down right awesome. A camera that you can wear whether you’re out in t-shirt or a tuxedo. A camera that inspires you. Because it doesn’t matter if you have the top of the line Canon or Fuji or Leica if it’s sitting on a shelf at home.

Now I’ve definitely got thoughts about the mirrorless vs. DSLR debate. I way prefer Fuji to Sony. I would take a prime lens over a zoom lens any day of the week. I think fewer lenses is better and 35mm & 50mm are the only lenses you’ll ever need. But all of that’s subjective. I know people who swear by their Nikon’s and others who love their 500mm zoom lenses. And that’s great. All those debates are totally subjective. But I stand by this as objective truth, that the best camera for you is a camera that makes you feel awesome. A camera that makes you want to take pictures. A camera that you think looks sweet strapped to your wrist or slung over your shoulder.

People who say, ‘it’s not the camera, it’s the photographer,’ are missing the boat. Sure if you put a ten thousand dollar camera in the hands of a blind raccoon you’re probably not going to get any great photos. But in the same vein, if Ansel Adams, Robert Capa, or Vivian Maier had left their cameras at home how much poorer would we all be.

So if you want to be a better photographer or are looking for a new camera here are my two most basic suggestions for you.

1. Find a camera that you’re passionate about.
2. Treat it like underwear. You wouldn’t leave home without it.

* This caveat is for the .01% of photographers who make their living taking pictures. For them I imagine client needs would be a deciding factor in any new camera purchase.

Infographic: The Difference Between CMOS and CCD Sensors