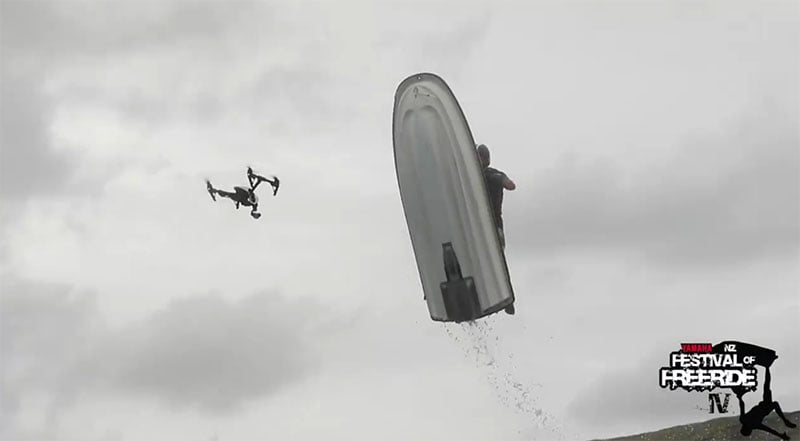 When shooting with your pricey camera drone, beware of… flying jet skis. That’s probably not a warning you’ve ever heard before, but check out what happens in this video.

New Zealand-based surf filmmaker Guy Mac posted the video yesterday after shooting at the Yamaha New Zealand Festival of Freeride 2016, which was held near the end of February. During the end, one of the riders hit a big wave, caught huge air, and accidentally took out a $2,500+ DJI Inspire camera drone that was hovering overhead.

Perhaps the jet skier has been playing a little too much Tony Hawk Pro Skater 5.

You can find Mac’s official event video over on Vimeo.

Finds, News
accident, cameradrone, dji, djiinspire, inspire, oops
Related Articles
Discussion
Trending Articles
Milky Way Explodes Into View During Lunar Eclipse
May 18, 2022
The Science Behind Why Watches are Set to 10:10 in Advertising Photos
May 17, 2022
Navy Fighter Jet Seen with ‘Shockwave Lines’ as It Nears Speed of Sound
May 16, 2022
Crocodile Dad Gives Over 100 Babies a Ride on His Back
May 15, 2022
Eerie Photos Reveal Last Moments Before Women Vanished in Panama
May 19, 2022