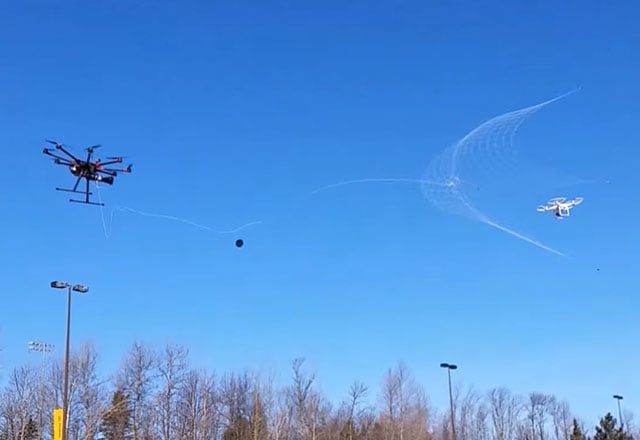 Another day, another innovative solution for catching, disabling, or destroying rogue drones. If your camera drone isn’t taken down by a radio wave rifle or a drone with a giant net in the future, you now have another countermeasure to be aware of: a “Spider-Man” drone that shoots out a web-like net to neutralize other drones.


Developed by researchers over at Michigan Technological University, the patent-pending drone is designed “to intercept and physically remove the intruding multi-rotor drones from the protected areas.”

“This system offers a viable solution when force-landing or shooting the drones would jeopardize the safety,” the researchers say. Here’s a short video demonstration of how this drone-catching drone works:

The drone can shoot a net at other drones from up to 40 feet (~12 meters) away. Once the drone is tangled up, it dangles from the “Spider-Man” drone and is flown away to a safe location. In addition to being manually operated, the drone will also be able to work autonomously in the future.

No word yet on when we might see this drone deployed commercially or how much a unit would cost.

(via Michigan Tech News via CNET)