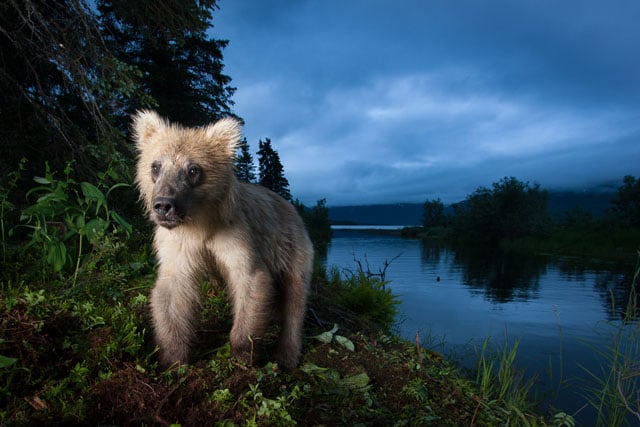 Photographer Jonny Armstrong‘s portfolio is filled with some of the most remarkable wildlife photos you’ll ever see: many of the portraits have a studio-like quality to them, and they’re often taken from just a few feet away.

The secret to Armstrong’s work is that he’s a master of camera trap photography, using remote cameras and triggers to catch creatures off guard when they’re going about their business.

By day, Armstrong works as an ecologist who has spent a decade studying ecosystems in Alaska. After first getting into long lens nature photography, he began dabbling with lighting, portraiture, and camera traps.

“I was becoming increasingly interested in lighting, I was constantly fiddling with electronics to build research equipment, and folks around me were using trail cameras to monitor wildlife,” Armstrong tells PetaPixel. “The net result was that I got the idea to build a camera trap to take lit portraits of wildlife.”

His first camera traps were all built from scratch using microcontrollers and sensors. After some trial and error, Jeff Dale of TRLcam taught him how to build a good camera trap that can last for a few weeks in the field “without 80 pounds of batteries for the trigger and flashes.”

Armstrong uses a number of Canon and Nikon DSLRs in homemade waterproof housings. “It’s scary at first to leave expensive full frame cameras in the wild, but the high ISO performance is important for much of my work,” he says. “I stop down to f/8 or beyond for depth of field, which makes my flashes weak and prevents me from pulling ambient light out of a dark scene.”

“Being able to use high ISO mitigates these challenges, allowing me to burn in moonlight or light subjects at low flash powers that freeze action–you’d be surprised how fast small carnivores move.”

“One really demanding aspect of camera trapping is that you have to work hard to get your gear working, work hard to get yourself in a position to ‘trap’ a critter, and then not lose sight of the photography,” says Armstrong, “it’s easy to rush through the camera setup end up with a disappointing image.”

So, he forces himself to slow down and set up his traps carefully with lighting and composition in mind. Then, it’s all up to chance.

“Now I don’t just need a critter to show up, but they have to be a specific species, come from a specific direction, and even arrive at a specific moon phase as absurd as that sounds (for long exposure night shots),” Armstrong tells us. “I don’t have a lot of success, but I love the process of camera trapping and how rewarding it is when things occasionally work out.”

His favorite photo so far is one of a cougar eating from a deer carcass. He traced cougar tracks back to the carcass, set up his gear in temperatures far below zero degrees Fahrenheit, and returned to his camera to find that the cougar returned to its kill a couple of hours afterward.

“I like the composition with the deer’s face in the foreground, I like how the lighting preserves the sense of night, but doesn’t feel underexposed, and I love the ecological story—the spilled dirt and snow show how the cat dragged the deer into the ravine and then buried it,” Armstrong says. “The lighting adds to the story by illuminating the steam from the cat’s breathe, showing both how cold it is and how hard the cat is working to rip apart the frozen carcass.”

Here’s a selection of other photos from Armstrong’s amazing portfolio:

Image credits: Photographs by Jonny Armstrong and used with permission