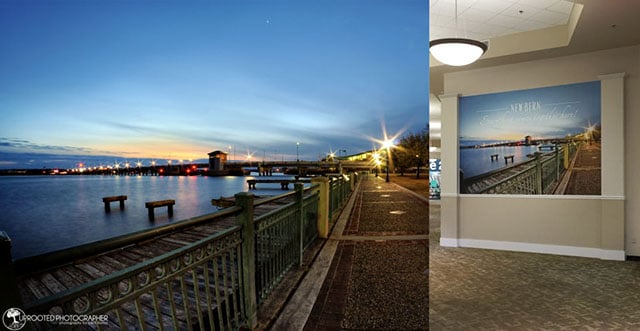 The following is my account of the most infuriating, frustrating and insulting photo usage theft I’ve dealt with. After attempting to resolve it with letters, phone calls and lawyers, I’ve decided the most beneficial thing I can do is lay out my experience in a cautionary tale and let people know how this company feels about photography.

On a busy evening in the middle of September, I headed out to the New Bern Mall to pick up a pizza for dinner. I don’t go into the mall often and hadn’t been to the pizzeria in a while either. So, you can imagine my feelings when I walked through the front doors of the mall to see this. 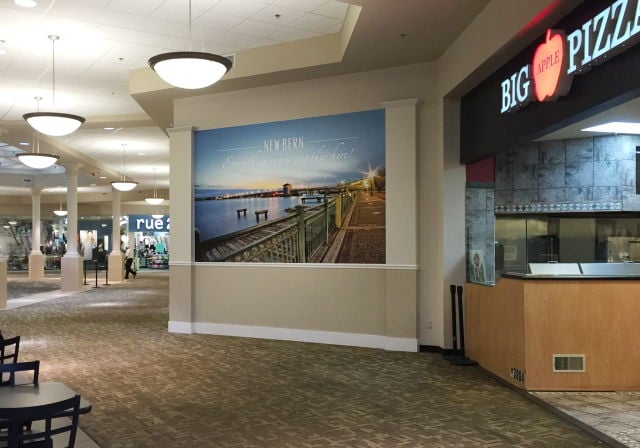 That’s my photo. Blown up into a huge mural. Altered with text. Without my permission. Surprise, anger, I felt it all.

I made this photo back in 2012, and aside from selling a couple of prints and posting it on Facebook, never really did much with it. In that vein, I wouldn’t call it a “signature image” that I worry about being used without permission. I’ve come to expect more popular photos to end up on websites or blogs one way or another. Those instances are dealt with easily and most of the time, painlessly and understandably. But I had never had this happen before and quite honestly, I was a little overwhelmed. 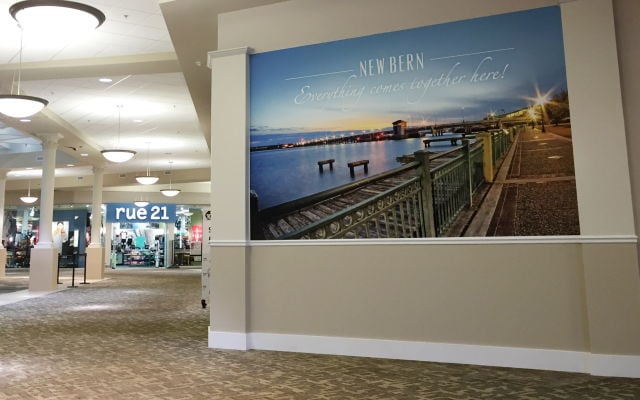 After doing a some research, I realized this image only ever appeared in three places online, all in low resolution: Facebook, Flickr and my blog. The latter was the only place not watermarked, again though, a low resolution file.

Doing a quick Google search for “New Bern sunset,” there it was, in a thumbnail with the link to my website. 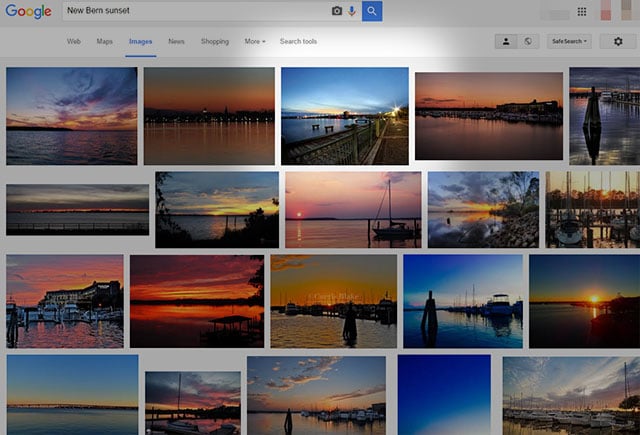 Seeing that the mural was grainy and low quality, I could tell it was made with a low resolution file. I surmised (later I would find out correctly) that it came from this Google search. It should also be noted that on my website, there is a tab titled, ‘Terms of Use,’ which lays out ways photos can be used and how to get in touch with me for commercial usage. Still, I was never contacted.

I wanted to hear back from the decision makers, and that was Hull Property Group, a division of Hull Storey Gibson. I sent a letter by way of Certified Mail to them at their Augusta, Georgia headquarters. A few days later I received a phone call. 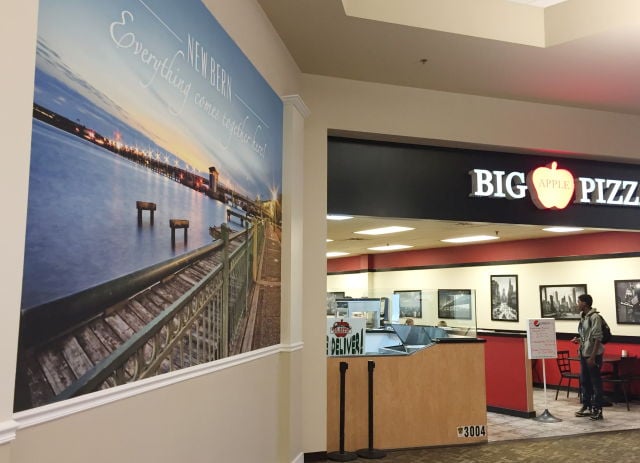 The call came from a marketing director who left a short voicemail to call her back so that we can “discuss the photo we have displayed in the mall.” I called back, and what followed was an extremely frustrating conversation.

I was told over and over that “we don’t view this as a commercial use.” And even worse, “what we do is search Google for images and only use ones that aren’t watermarked.” She explained that taking my photo, altering it, blowing it up and printing it for prominent display is “not stealing, not commercial usage” and that they do this with their other malls as well.

I asked, “you’re taking artist’s work without permission and using it to advertise your business, what do you call that?” and to that the reply was, “we don’t view that as commercial use.” It was like a broken record, as if she was coached as to what to say to make me go away.

I was given two options, they’d remove it or add credit somewhere around the display. I chose removal — immediate removal. Then, in the most insulting way, I was asked what kind of compensation was sought for usage, in her words, “are we talking $20 or $200 or what?”

There was a bill included in the letter, a compensation number that I think anyone in my field or in a large corporation such as Hull Properties would find to be reasonable. But “$20 or $200″ was thrown out across the phone. The phone call ended shortly thereafter. No, the photo stolen from my website and put on the wall would not remain. I asked that it be removed by the end of the day.

If I hadn’t walked into the mall that evening (I haven’t been back since) I would have never seen my photo on the wall. That seems to be Hull Properties’ plan in their mall decor. That they were brazen enough to tell me that they “do this with all their properties” just making sure that they “aren’t watermarked” shows either a complete disregard for intellectual rights or that they’ve gotten away with it so much that it’s second nature now.

I have no idea if anyone else has dealt with this at one of their other malls in the southeastern United States, but I would really hope someone has. Because chances are there are other photographers being infringed upon by this ownership without any knowledge of it whatsoever.

In the following weeks I was in touch with several lawyers and eventually had a lengthy discussion with an intellectual property attorney in Charlotte. The photo stolen was not registered with the U.S. Copyright Office and without that, it would be hard to collect damages aside from usage fees. Though we felt confident that I’d win a case in court, it would be possible that I’d only break even or even spend more money than collected after fees were paid. If it had been registered, that wouldn’t necessarily be the case. Therefore, I’ve decided to share my story here.

I hope fellow photographers consider registering images with the U.S. Copyright Office, as I will be from now on. Also, it’s important to keep an eye out for your work — many times not only what you consider your best work — to show up in the wild. It’s one thing for a website to use an image as a banner. Those situations are usually resolved with an email and most of the time, in my experience, they’ll pay the usage fee. Many times it’s a true misunderstanding.

But other times, you get this insulting situation.

About the author: Zach Frailey is a photographer based in New Bern, North Carolina. A lover of all things outdoors, his goal is to encourage awareness, promote conservation and instill appreciation of our natural treasures, locally and nationally, through his work. You can find his photos on his website and his Flickr. This article was also published here.

Photographers in Dispute Over No Compete Contract

This is How You Photograph Giant Waves Crashing on a Beach