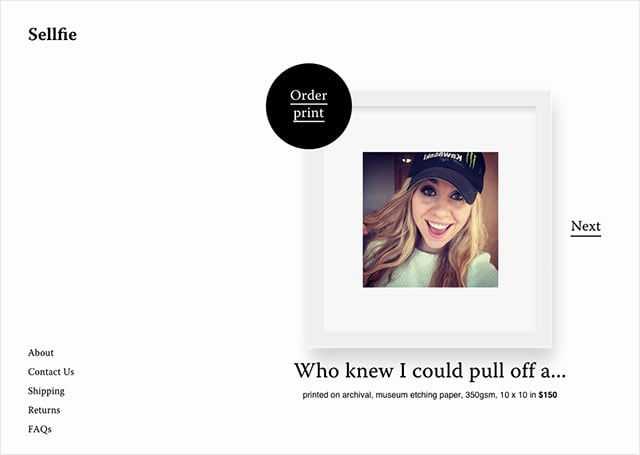 Earlier this year, artist Richard Prince sparked a huge controversy by taking people’s Instagram photos, making very small changes to them, and selling the prints as fine art for $100,000 a pop. Now there’s a new website that’s following in Prince’s footsteps, on a larger scale but with smaller prices.

It’s a service called Sellfie, which scours Instagram for the hashtag #selfie and then sells the photos as single-edition, high-quality prints for $150 — all without the photographer’s permission.


The website (note: some random photos may be NSFW) is sparse: it simply features one random photo with a link to order the print if you like it. A “Next” button brings up another random Instagram photo for you to consider. 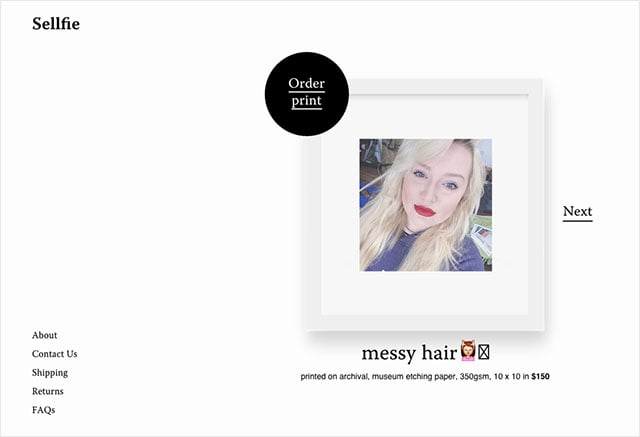 There’s absolutely no attribution alongside the photos — aside from the caption given by the owner, you won’t find any original link or username. Once a particular Instagram photo is ordered through the site, it won’t ever appear for sale through Sellfie again, meaning the buyer receives a single-edition Sellfie print.

Interestingly enough, the Sellfie website’s “About” page features a quote by Richard Prince about selling direct and cutting out middlemen. 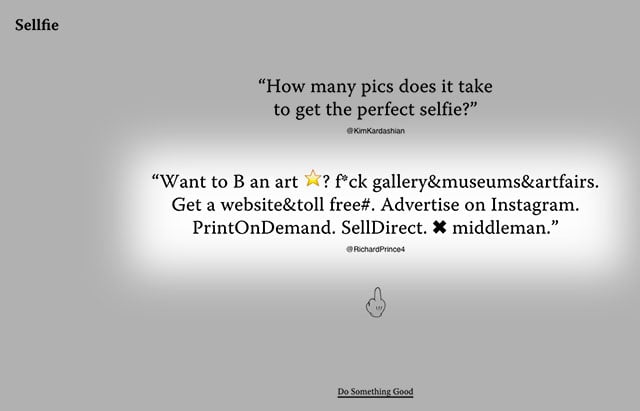 The Huffington Post reports that this service is the brainchild of a New York-based creative director named Damjan Pita and his incubation collective (ironically) called Do Something Good.

Pita may have been inspired by Prince’s highly-publicized art stunt, but he appears to be on even weaker footing than Prince when it comes to the subject of copyright. While Prince would argue that his work is “appropriation” and “transformative” because he added his own comments to each of his “borrowed” photos, Pita is apparently selling Instagram photos as-is.

“There is today a debate in the copyright law community on just how much modification of the protected work there needs to be to qualify for fair use,” UPenn law professor Shyam Balganesh tells HuffPo. “It doesn’t have to be an enormous modification; but there’s also a recognition that there needs to be more than something inconsequential, like a few words or a couple of brush strokes.”

Balganesh doesn’t believe Sellfie’s prints are sufficiently transformative to qualify as fair use, so anyone who finds that their photo was sold by the service may have a solid copyright infringement case against it.

Unfortunately for photographers, finding your own photo for sale on the site appears to be a nearly impossible task: the site provides no way of searching for your photo or tracking which photos were sold. So for now, it seems like Sellfie will just go on selling prints of photos without permission and with impunity.