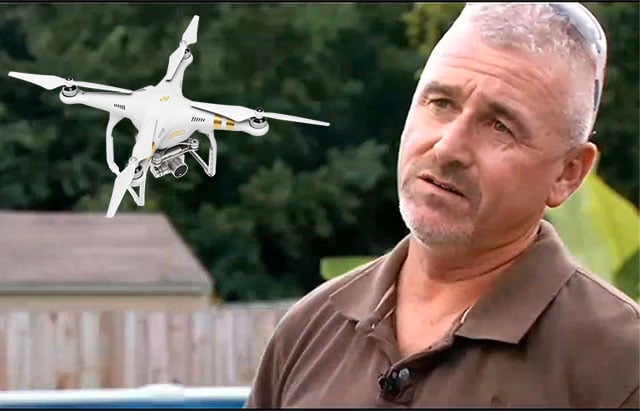 A man in Kentucky was arrested this past Sunday after he used a shotgun to shoot down a camera drone flying over his property. He’s being charged with criminal mischief and wanton endangerment, both of which are felonies.


47-year-old William H. Merideth of Hillview, Kentucky, told police that his daughters called him out of the house, saying that there was a camera drone “flying over everybody’s yard.”

A neighbor nearby also reported seeing the drone, telling local news station WDRB that seeing a camera flying over where her 16-year-old daughter sunbathes was “creepy and weird.” “I just think you should have privacy in your own backyard,” she says.

Merideth says he grabbed his shotgun and waited to see if the drone would pass over his property. When it did started hovering over him for more than a few seconds, he blasted it out of the sky.

The drone owners soon drove up and confronted Merideth about their drone, saying that it cost $1,800 and that they were trying to take pictures of a friend’s house.

“Four guys came over to confront me about it, and I happened to be armed, so that changed their minds,” Merideth tells Ars Technica. “They asked me, ‘Are you the S-O-B that shot my drone?’ and I said, ‘Yes I am.’ ‘I had my 40 mm Glock on me and they started toward me and I told them, ‘If you cross my sidewalk, there’s gonna be another shooting.'”

Merideth says he’s unapologetic about his actions, and is arguing that he was simply exercising his right to maintain the privacy of his family.

Merideth claims that many people he spoke to — including law enforcement officers and the county jailer — agreed with his actions. He’s now looking into taking legal action against the drone owners to make sure that new rules are put into place to address this issue.

Update on 8/1/15: The drone’s owner has responded to Merideth’s claims with his side of the story: