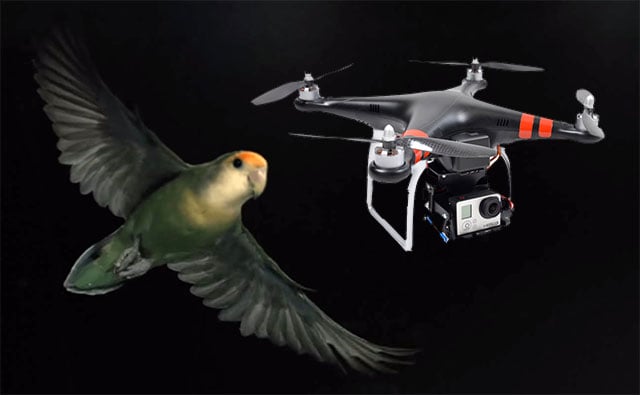 The way lovebirds turn their heads while flying could help engineers build better camera drones that can capture scenes with less blur, even during high-speed maneuvers. That’s what scientists are saying after studying the flight of lovebirds with a high-speed camera.

This means the bird could turn its head 360-degrees around (if it could) in less time than it takes for a human to blink — their head turns are literally faster than the blink of an eye.

Here’s a super-slow motion video of a lovebird turning its head and changing its direction in the air:

So how does this finding have anything to do with camera drones? Lentink thinks that rotating gimbals faster could help camera drones capture better image quality.

“If drone gimbals would be as fast as the neck of a lovebird, making a saccade of 60 degrees in about 40 milliseconds, they would be able to reorient the camera in a single frame, since typical drone cameras operate at about 30 frames per second,” Lentink says. “With only one frame blurred, the videos would essentially be free from blur due to camera movement, even during dramatic maneuvers.”