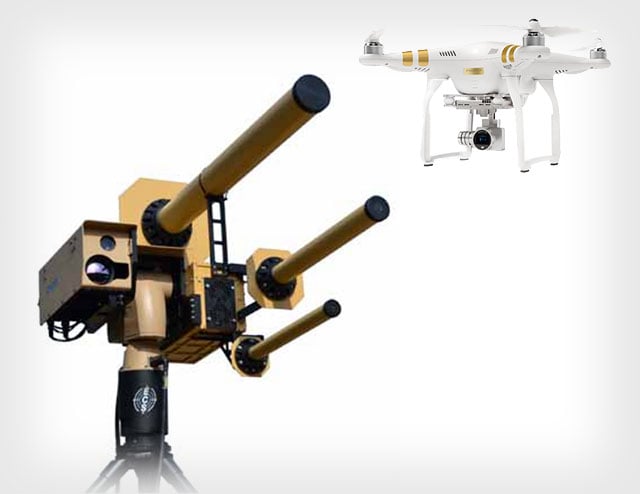 Camera drones have opened a whole new world of possibilities for photographers looking for a way to capture aerial images, but the meteoric rise in drone adoption has also opened up Pandora’s box as well. Now a new industry is emerging alongside the booming drone industry: anti-drone defense systems.

Just last week, multiple drones kept firefighters grounded during a wildfire in Southern California. State senators responded by introducing new bills that give firefighters permission to take down drones that are interfering with rescue operations.

That’s just one case in which authorities would like to have more control over the flight of consumer drones. Another would be the possibility of weaponized camera drones flying around. A lighthearted video of a fireworks-shooting drone went viral earlier this year, but people weren’t laughing as much when a flying handgun drone was spotted on YouTube earlier this month:

The 18-year-old man that uploaded that video is now being investigated by the Federal Aviation Administration.

As the number of these incidents and concerns mount, anti-drone defense systems may soon be a booming industry. The Wall Street Journal reports that quite a few companies are working on various solutions to neutralizing drones in the air.

Some of the systems use radio-frequency jamming to disrupt or hijack a drone’s communication capabilities, forcing it to land or change course. A UK-based company called Blighter Surveillance offers this type of technology in a $1 million system called AUDS (the Anti-UAV Defence System). Here’s a 3-minute video showing how AUDS works:

Other devices use high-powered lasers to shoot drones right out of the air from distances of hundreds of meters. One such device is an anti-drone laser being developed by a group of European defense companies, which apparently uses a consumer telephoto lens to spot its target. It successfully destroyed a flying drone from a distance of about 550 yards at a recent test:

Here’s a 2-minute-long report by the Wall Street Journal on the rise of anti-drone technologies:

These anti-drone systems are just one way of addressing these new drone security issues. On the drone side of things, some manufacturers, including market leader DJI, have begun building “no fly zone” restrictions directly into the onboard firmware.

It’ll also be interesting to see whether governments begin forcing drone makers to build extra security measures into the drones themselves — things like kill switches or ways for authorities to take control.