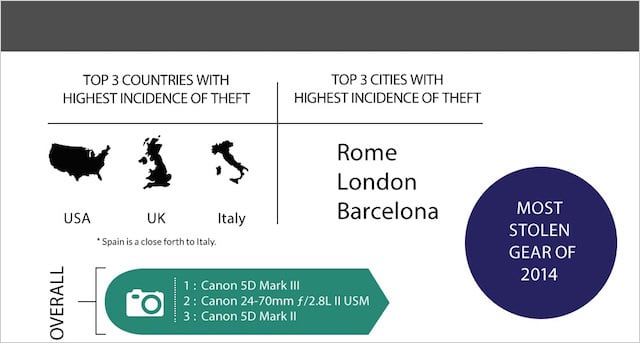 Last year, anti-theft service Lenstag pulled all of its stats together to figure out what photography gear is stolen the most and where it’s most likely to be stolen from. Now, one year older and a full ten times bigger, they decided to give the infographic a more comprehensive go.

This year’s graphic covers more bases, including computer theft, action cam theft, and even the regions where photo gear theft is most prevalent.

With 10 times more statistical info at their disposal, what gear is stolen most and where it’s stolen has also changed, painting what is probably a more accurate picture for all those people out there who want more reason to be paranoid about their expensive cameras and lenses.

Check out all the statistics below:

As you can see, over half of all gear theft happens either out of your car or house, with public transportation and robbery coming in a distant third and fourth. And if you’re thinking of traveling, you might wanna keep a particularly close eye on your gear if you’re visiting Rome, London or Barcelona…

Check out all the stats above, and then, if you’re interested in keeping your gear catalogued and hopefully even recovering it if it ever gets stolen, you can learn more about Lenstag on the company’s website.