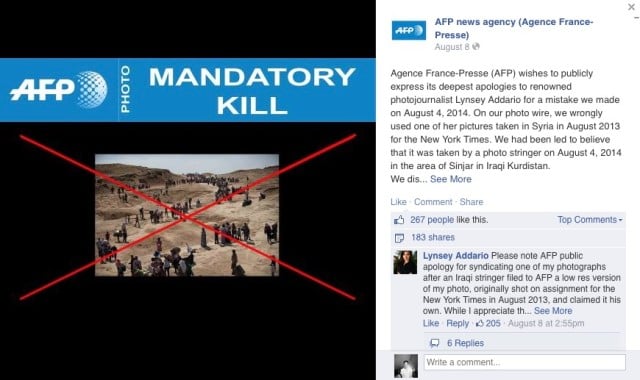 Agence France-Presse, more commonly known as AFP, is in the hot seat once again, less than a year after they and Getty were ordered to pay $1.2 million to photographer Daniel Morel. This time though, the ordeal is far less expensive, ending with an apology shared on Facebook.


It was on the 4th of August that an AFP stringer, based in Iraq wired a photograph to their servers, which supposedly depicted a scene captured in the area of Sinjar in Iraqi Kurdistan. The problem was, the photograph was blatantly stolen from renowned photojournalist Lynsey Addario; a photograph she captured in Syra in August of 2013, for the New York Times.

Naturally, AFP immediately pulled the image and requested it be taken down by any of its clients which syndicated the photograph. But the damage was done. In an effort to better explain the circumstances that lead to the syndication of the photo and to correct the issue at hand, they issued an apology and explanation on their Facebook page. It reads as follows:

Agence France-Presse (AFP) wishes to publicly express its deepest apologies to renowned photojournalist Lynsey Addario for a mistake we made on August 4, 2014. On our photo wire, we wrongly used one of her pictures taken in Syria in August 2013 for the New York Times. We had been led to believe that it was taken by a photo stringer on August 4, 2014 in the area of Sinjar in Iraqi Kurdistan.

We discovered the mistake the following day. We immediately issued a Mandatory Kill (below) asking our subscribers not to use the picture. At AFP, we are all aware of Lynsey Addario’s great reputation and have immense respect for her work – which makes this mistake even more painful.

We would like to assure Lynsey Addario, the New York Times and all our subscribers that we will take every measure possible to avoid any such mistakes in the future, and that very serious steps are being taken to find where we failed in the editorial process and rebuild confidence in the strength of our ethical and editorial standards.

Not long after AFP shared the above statement, Addario herself made her thoughts known, giving her perspective of the situation, writing,

Please note AFP public apology for syndicating one of my photographs after an Iraqi stringer filed to AFP a low res version of my photo, originally shot on assignment for the New York Times in August 2013, and claimed it his own. While I appreciate the apology from AFP, one issue remains clear: AFP accepted and syndicated a low-res, pirated image without recognizing or questioning its authenticity. We have entered a time where news organizations are increasingly buying material from citizen journalists and amateur photographers who have not been schooled in the basic ethics of photojournalism, and editors and photographers need to be more vigilant when they buy and syndicate work.

While AFP is the one who took the heat for this one, it looks like they handled the situation to the best of their ability. A rogue stringer is all it takes to ruin a reputation, but both AFP and Addario seem to be on good terms and understanding regarding the entire situation.