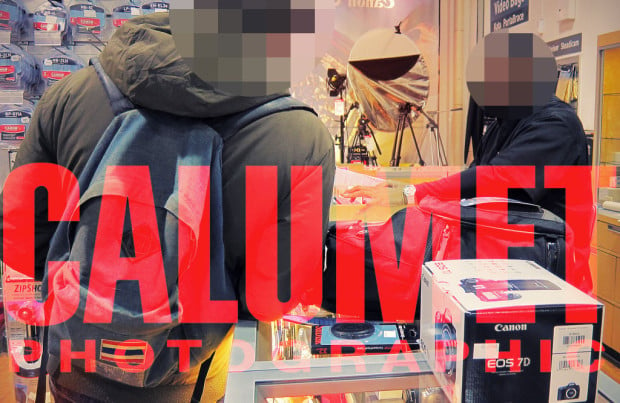 Shortly after news broke this morning that camera store chain Calumet had declared Chapter 7 bankruptcy and would be closing all of its US stores (or will it?), a Calumet Rental Manager — well, former Rental Manager now — got in touch with us to see if we wanted to get some of the behind the scenes details of how the bankruptcy came to be.

We, of course, said yes. The employee has asked to remain anonymous, and so his/her answers are labeled simply as “Calumet Employee” below.

PetaPixel: When did you find out that the Calumet store was closing?

Calumet Employee: Officially, I heard last night when I got an email from my store manager. He said that the company was filing for Chapter 7 and that they store would be closed. Unofficially we had been expecting something like this for months. Twice Calumet had not been able to pay their employees. The last paychecks that were due to hit employee bank accounts last Friday never showed up. No updates were given until around 4:45 when the company promised “live checks” the next day. The problem was blamed on the service we use to punch in and out with.

PP: So you guys really did have no warning at all then. You said there were signs that closing was ‘imminent,’ what sort of signs are you referring to?

CE: We had been having trouble getting equipment in stock for a long time. The first obvious things were products like Nikon cameras and lenses. Whenever we asked why there was a problem managers would blame Nikon or whatever the supplying company was. Eventually the problem spread to Epson, Sony, Fuji and various others. It’s hard to say how many vendors we were on credit hold with but most likely all of them. Most recently, Canon was the only supplier we were receiving stock from. Finally, once UPS would no longer pick up shipments from the company, things seemed obvious.

PP: What do you think the company was doing wrong?

CE: In March 2013 the company bought a few Penn and Ritz Camera stores in the DC/Baltimore area. This spread out the company in a positive way. Having more locations is a great thing. That being said, customers expect these locations to have stock. The upper management never seemed to understand this. Corporate expected sales to be made by special order. Customers will tell you the real benefit of a brick and mortar is that you can get you hands on products before spending significant amounts of money on them.

PP: Was there anything that could have been done to save the business but wasn’t?

CE: A lot of us expected the company to pull back. Closing some of the small stores would have made sense. Keeping open the major market stores and dedicating time to the e-commerce side would have been my move. Really the problem is that there wasn’t stock to sell. Customers were coming in to the stores but typically left disappointed.

Also, after working with the company for more than a year and a half there was little to no training. All my camera/photography knowledge came from my experience as an assistant, or my own freelance jobs. This seemed ridiculous for a company that values its employee knowledge at $100.00 per hour.

PP: Several sources have said there is still rental gear out to customers, as a Rental Manager can you confirm this and/or tell us anything more about how the store plans to handle the situation?

CE: Yes there certainly is rental gear out. I know of at least one medium format kit that is out on a demo right now. I also have gear that is due to go out today and tomorrow. I have not been told what these customers can expect. I would suggest these customers seek other rental companies for now. That being said, Calumet has just updated their Facebook page, giving hope about opening some locations. If I hear anything about this I’ll contact you immediately. This was my biggest fear when thinking about the company closing. I wish I could have given some kind of warning to my customers.

I also know that there are cameras in for sensor cleanings. I wish I had information for those photographers.

PP: Is the company currently doing anything at all to make this easier on the employees it’s leaving out in the cold? What do you think they should do?

CE: Calumet has not contacted me yet. I’ve already filed for unemployment so I have a safety net.

I doubt Calumet will offer any severance packages. After reading some articles on Chapter 7 it looks like they owe us for hours we’ve worked and sick time. That’s if they can find that money in the liquidation process.

PP: What does the future look like for photographers purchasing camera equipment?

CE: Have you ever visited BHphotovideo.com?

PP: As we understand it, Chapter 7 means liquidation. Any idea how they’re going to handle that? Is Calumet planning on selling off its inventory at super cheap prices?

CE: While working in rentals, corporate took slow-moving equipment from the departments and sold them as used equipment. I’ll bet they’ll do something similar but sell it to B&H or Adorama.

PP: How are your fellow employees reacting? Today must have been a very confusing day overall…

CE: Today is very confusing but I doubt any employees are surprised. It feels like a family member has been sick for a long time and has now been put out of their misery. Other employees are frustrated but I doubt they’ll react very negatively.

PP: Any other info you want to share with our readers?

CE: Calumet recently changed their company President from Brian Caroll to Gabe Garcia. Gabe was a former Ritz guy. As a matter of fact a lot of Calumet staff is former Ritz guys.

You should take a look at their GlassDoor profile, that will go along with a lot of the things I’ve said here.

Although competitive, the photo community is nothing but supportive. I’ve been contacted by many friends, customers and former employers. All of them asking the obvious questions but also seeing if I’m alright. I’m very gratefully to be part of such a supportive community.

PP: Thank you so much for taking the time to answer our questions. We wish you all the best!