Update: It looks like it’s already been fixed. Kudos to Getty for the quick response. 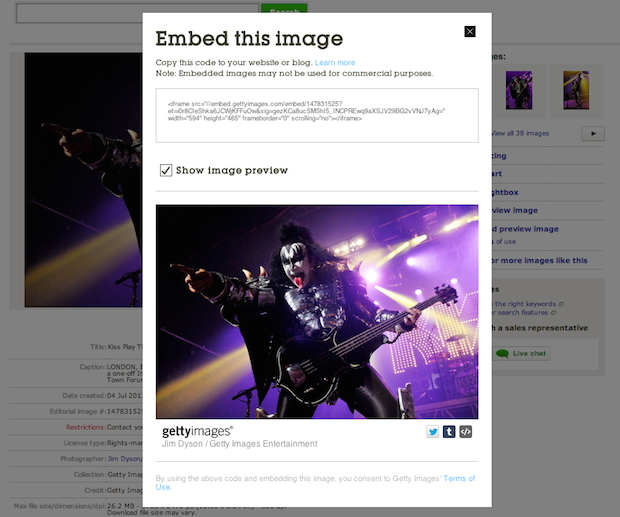 Getty’s embed tool has been live for less than 24 hours and ALREADY somebody has figured out how it can be taken advantage of. It turns out that all it takes is some extremely simple code to remove attribution entirely.

Pointed out to us by photographer Todd Owyoung, it seems photographer’s credit is ridiculously easy to crop out of the embed code. In fact, even the most novice of HTML users could make the adjustment in a matter of seconds.

All you have to do is shorten the height of the image without altering the width. Instead of resizing the whole thing, it crops from the bottom up. As such, the first thing to go is the credit. Here’s an example of credit slowly being cropped out as I change the height of this image (originally 540px) to 500px and then 460px.

As you can see, you can even choose to leave in Getty’s credit and the share links, while nixing the photographer’s name entirely.

Of course, clicking on the image itself still takes you to the image on Getty, but if you cut everything out there’s no guarantee anyone will even know that the image is clickable. What’s more, this sort of alteration doesn’t seem to be a violation of the Terms of Service that Getty has set out, so people who do this aren’t technically doing anything wrong.

Fortunately, this should be an easy fix — either by making it a violation in the TOS to alter the code, or by somehow changing the system so this doesn’t happen — but the sooner Getty gets on this the better.

A big thank you to Mr. Owyoung for pointing out this flaw to us. Check out his blog post on the issue for more examples and a more detailed look at the code.