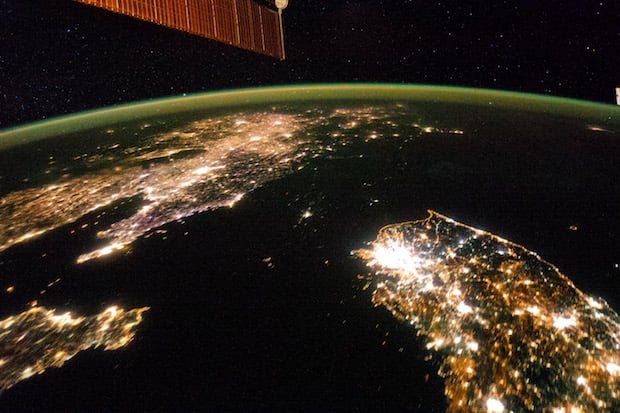 A new photo released by NASA and taken from the International Space Station shows just how dark North Korea really is, and we don’t mean figuratively. Taken on the night of January 30th as the ISS was passing over the Korean Peninsula, a nearly completely blacked-out North Korea jumps out at you, surrounded by its well-lit neighbors.

According to NASA’s description, night photos from space are a great way to gauge a city’s relative economic importance, and the photo seems to back this up. Seoul is practically a beacon, and several major cities in neighboring China shine brightly in the image.

The one place not shining in the least is the entire country of North Korea, where only Pyongyang shows any real signs of life, and even then only just. From NASA’s Earth Observatory website:

It’s a striking reminder of how literally and figuratively dark the country is: Pyongyang, North Korea, a city of 3.26 million, looks about the same size as Gunsan, South Korea, population 280,000. The rest of the DPRK might as well be an extension of the Yellow Sea.

You can read more about the image or check out the high res version over on the EO website by clicking here.