iStock, which is owned by Getty Images, is in the process of notifying some nine thousand users that they owe Getty money because an error with the payment system overpaid them in September and October of 2013.

According to a post on the iStock forums, the problem was discovered in December by the company’s Finance team and was initially thought to affect some 25,000 members. The good news is, only 9,000 were affected. The bad news: those 9,000 now owe Getty Images all of that money back… but don’t worry, they’ll take it out in installments over the next six months… because they’re being considerate…

We were notified about the situation by an anonymous user who emailed us yesterday night outraged that he would have to pay back over $900 back to Getty Images/iStock over the next six months. Here’s what they and 8,999 other members were greeted by in their email Inbox:

We discovered that there were some irregularities with September 2013 and October 2013 Partner Program royalties payments. There were a number of contributor accounts that were overpaid royalties over these two months. Unfortunately your account was one of the affected accounts.

We have calculated the over payment amount to be $956.66. Rather than take this amount out of your royalty balance in one adjustment we have decided to schedule the removal of these funds over a 6 month period. Starting before the end of February 2014 we will begin removing $159.44. Once per month for the next six months we will recoup the balance of the over payment. You will receive a monthly notification as immediately after the funds are removed.

Obviously the amounts differ, but the general message is the same: we overpaid you, you owe us money, but don’t worry we’ll ‘remove’ and ‘recoup’ those funds over a six month period so it’s not quite as much of an inconvenience. 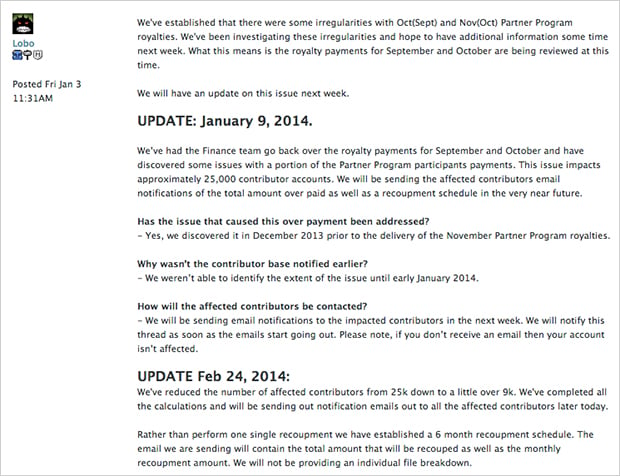 This is just a horrible situation all around, from the original issue to how Getty is handling it. Photographers who already feel they’re being taken for a ride by Getty (iStock keeps 85% of every sale for non-exclusive members) are now being told they have to pay back money they were given, and are going to be understandably upset. But then again, does anyone really expect Getty to let what might be millions in overpayments go uncorrected?

Well, if they did, it would certainly make for some great PR for a company that doesn’t exactly inspire goodwill and happy thoughts in the majority of the photo community, but we somehow doubt that’ll happen.

You can head over to the forum post (or read the attached image above) for more details, but what’s your take on this whole debacle? Let us know in the comments down below, especially if you were one of the unfortunate nine thousand who are affected.