The filmmakers behind a BBC nature show got more than they bargained for when they came up with the idea of encasing a video camera in a fake egg to gather surreptitious footage of a penguin colony on the Falkland Islands.

Recently released clips from the nature series “Penguins — Spy in the Huddle” shows predator birds pecking, kicking and carrying the camera — one of 50 strewn around the rockhopper penguin colony — in search of a quick snack. 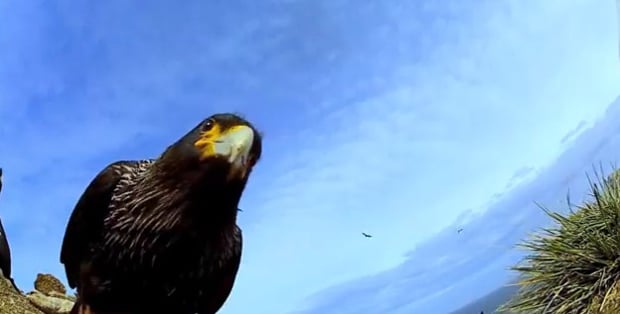 First up is a striated caracara, a type of falcon who sees the apparently abandoned egg and swoops in to investigate. After a bit of poking with beak and feet (and a long downhill tumble that demonstrates how sturdily the contraption is made), the caracara picks up the egg in his talons and takes it aloft, providing a striking aerial view of the colony at an altitude a helicopter would never dare.

After the caracara gives up, a pair of turkey vultures take a turn at getting to the gooey lunch presumably inside the egg, sending the camera on yet another rock-bashing tumble downhill before it comes to rest back in the middle of the penguin colony.

Although the footage captured by the turkey vultures is less than impressive, the caracara clearly has a knack for aerial photography… if only that egg had some image stabilization.