This is, as they say, an oldie but goodie. Put together all the way back in 2009, this self-portrait time-lapse chronicles one man’s journey walking almost all the way across China on his way to Germany. A journey as much about the physical challenge as it was about self-discovery.

The man in the video is Christoph Rehage, who embarked on ‘The Longest Way‘ the day of his 26th birthday on November 9th, 2007. It was, at its most basic level, supposed to be a walk back home. Rehage is from Germany but had spent a few years at the Beijing Film Academy studying Chinese and Cinematography.

He had already walked almost 500 miles from Paris to Germany in 2003, so the idea to walk back home from Beijing seemed perfectly logical. Documenting the walk by cutting off all of his hair and taking self-portraits, well, that was unique to this trip. 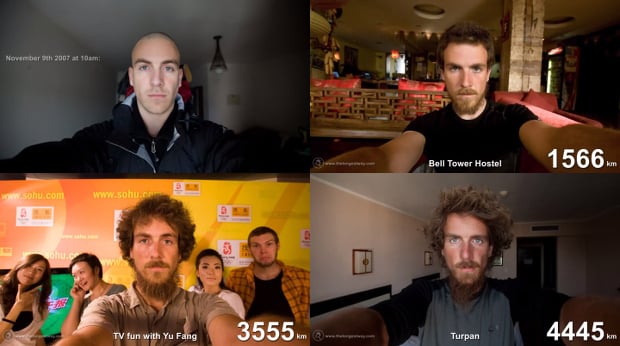 In the end he didn’t make it all the way to Germany. He decided to stop in Ürümqi on October 25th 2008 because, as he describes it, “I wanted to gain back my life. I had to regain control over myself, eliminate the inner boss that was telling me what to do.”

Since 2009, he has done even more walking, once a few hundred more kilometers towards Germany from where he left off, and then another major walk through China (although that one wasn’t documented with either time-lapse or an awesome beard).

To learn a lot more about the journey or the man behind it, head over to Christoph’s website by clicking here.