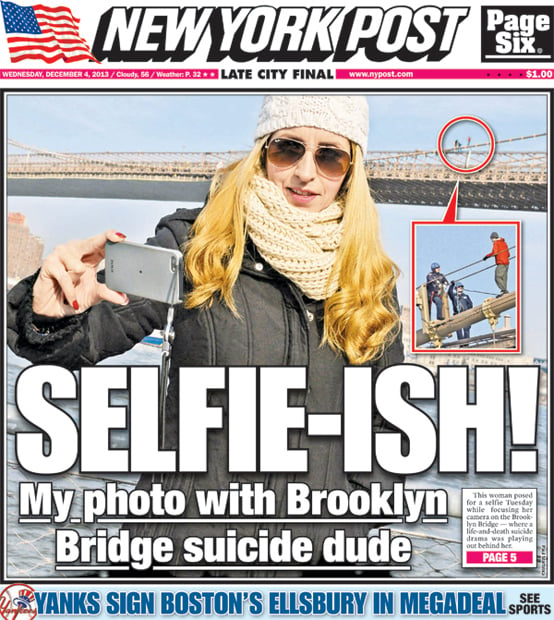 So emergency workers are all over the Brooklyn Bridge, trying to talk down a suicidal man poised to jump. Media people are everywhere, doing their usual sensitive storytelling. A big chunk of the city is holding its breath, waiting to see how the life-and-death drama plays out.

Perfect time for a selfie, right?

At least that’s what it looked like an anonymous woman was doing the other day when a New York Post reporter witnessed her lining up a selfie just right to get the potential jumper in the background.

Reporter Paul Martinka quickly snapped a photo of her snapping the photo, and the image was spread across the Post front page Wednesday alongside the headline: SELFIE-ISH: My Photo With Brooklyn Bridge Suicide Dude.”

The woman declined to identify herself to Martinka and quickly left the scene — though how long she’ll manage to stay anonymous is another question entirely. Her selfie didn’t show up in a quick search of relevant Instagram hashtags, but maybe she feels famous enough already now that she’s competing with shots from Auschwitz and funerals for the title of “Worst Selfie Ever.”

The man on the bridge, by the way, was talked down safely.

An Intro to Adventure Sports Photography: 10 Photographers You Need to Check Out