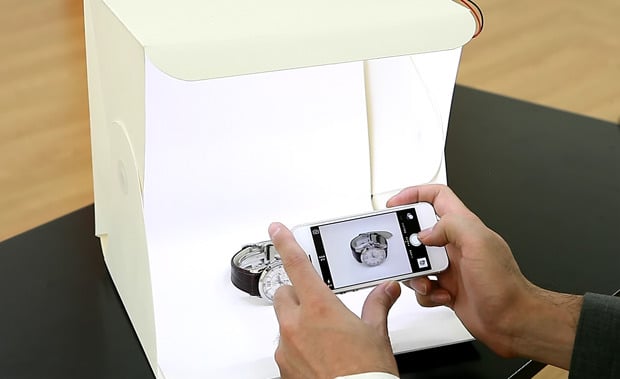 A new smartphone photography product is making some serious waves on the Internet ever since the launch of its Kickstarter campaign just a few days ago.

It’s called Foldio, and it’s an ultra-portable (foldable in fact) light box for smartphone shutterbugs who want to add a new dimension to their work or take some professional-looking product shots.

Foldio is calling itself the “world’s first foldable portrait studio,” and although we won’t go so far as to corroborate that claim, it is the first mass produced and non-DIY foldable light box we ourselves have run across. Here’s a quick Kickstarter intro to the Foldio:

As you can see, the concept is simple but very well executed. The creators of Foldio over at Orange Monkey wanted to create a portable light box specifically for smartphone photography. What they came up with was a foldable cardboard light box that pops up in seconds thanks to the built-in magnets.

Foldio even provides its own lighting, thanks to the built-in LED strip — after all, how many smartphone photographers out there have a strobe at their disposal? And to top it off, the white background sheet can be replaced with a myriad of different color sheets, all of which are washable. 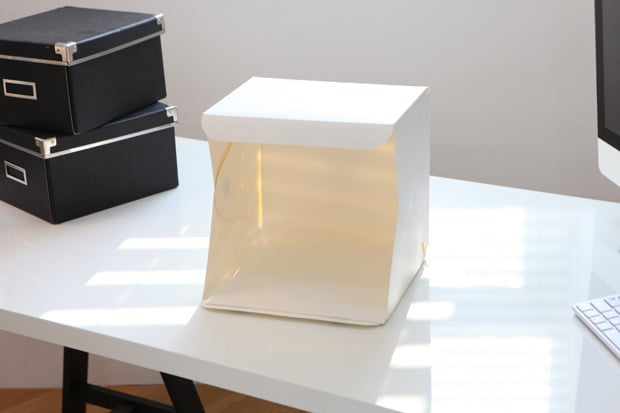 Here are a few sample photos taken using Foldio and an iPhone:

It’s certainly not a product for the serious studio photographers out there — they already have more professional options at their disposal. But for the everyday joe who would like a versatile, portable way to take product shots when, say, they’re selling their wares on eBay, this could come in very handy.

In the few days since it launched, Foldio has already raised three times the $10,000 it needed to become a reality. If you want to pick one up yourself, head over to the Kickstarter campaign and be ready to drop $34 for the basic Foldio set, or $43 if you want the other background color options.

Equipment, Ideas, Products
foldio, lightbox, portable, portraitstudio, smartphonephotography
Related Articles
Discussion
Trending Articles
Mars Curiosity Rover Snaps Photo of ‘Doorway’ on Mars
May 16, 2022
Crocodile Dad Gives Over 100 Babies a Ride on His Back
May 15, 2022
Navy Fighter Jet Seen with ‘Shockwave Lines’ as It Nears Speed of Sound
May 16, 2022
The Science Behind Why Watches are Set to 10:10 in Advertising Photos
May 17, 2022
Milky Way Explodes Into View During Lunar Eclipse
23 hours ago