National Geographic photographer Steve Winter is a big on the big cats. After all, he was willing to spend 12 months chasing after the perfect mountain lion shot. In the video above, he didn’t have to exhibit that sort of patience, instead he had to control a finicky robotic camera rig as best he could and try to snap some awesome photos of a curious tiger.

The video was actually uploaded last year in March, but only just caught our attention when it made its way onto Reddit.

Initially, it’s just a behind the scenes video showing Winter as he tries out a newly-designed robotic camera rig that was built specifically for documenting tigers from closer by. But just as they’re bringing the robot back from its first test run (which, by the way, wasn’t going well) a tiger stalks out of the forest to inspect the doohickey. 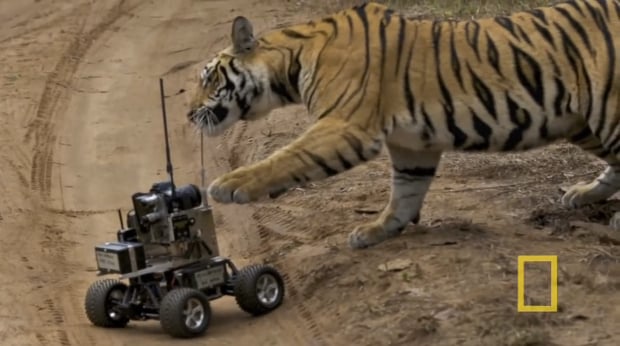 That’s when it gets good, because technical difficulties or not, the option to bring the robot back in to fix it disappeared when the tiger appeared. So, even though the rig is malfunctioning and not allowing Winter to move the camera the way he wants, he has to make due and capture something special.

Of course, it’s hardly a spoiler when we tell you he succeeded… after all, he’s a celebrated National Geographic photographer. Check out the video at the top to see the whole experience for yourself and, if you’d like to see more of Winter’s work when you’re done, check out his website by clicking here.