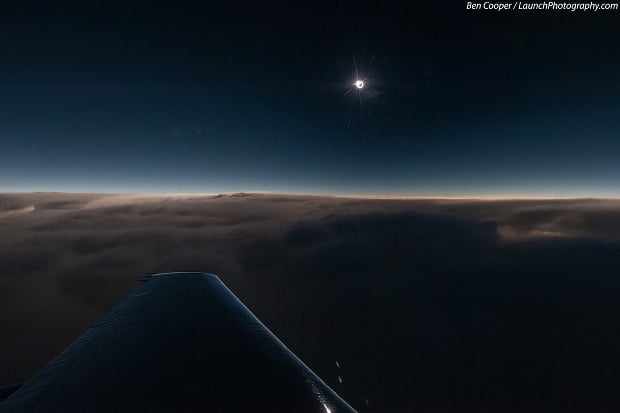 Forget storm chasing, that’s a cinch when you compare it to what former NASA photographer Ben Cooper and some colleagues of his did last weekend: eclipse chasing. Cooper captured the shot above from a chartered jet going 500mph at 44,000ft in the air, but it was a near miss.


You see, they had to try and cross the Moon’s shadow as it moved across the Earth… and that puppy was shuffling right along at 8,000mph!

So you see why we say this is a bit tougher than storm chasing (no disrespect to storm chasers though… you guys have cojones of steel), when it comes to intercepting an eclipse you’ve got no time at all.

They were flying in a Dassault Falcon 900B, and as Cooper puts it:

There was zero margin of error, with the plane, traveling near 500mph and hitting the eclipse shadow where it touched down on earth at some 8,000mph, required to hit a geographic point over the ocean at a precise instant.” 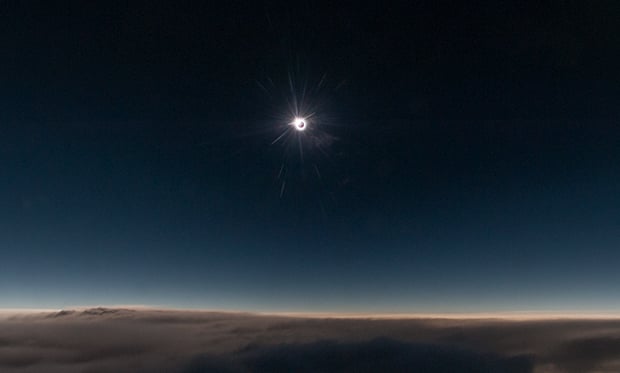 This is only the second time a flight has successfully intercepted such a short eclipse. And, actually, because they were about one second off, what was supposed to be seven seconds of total eclipse turned into a calculated zero seconds. Whether or not they experienced even an instant of totality is still up for debate.

The eclipse itself was special as well, a rare “hybrid” eclipse that starts off annular and then, because of the curvature of the Earth, turns into a total eclipse for a bit (read full explanation here). If you can catch it as it’s transitioning between the two, explains Space.com’s Joe Rao, you’ve got a pretty amazing view on your hands:

Just before the transition from annular to total, the eclipse will become something neither annular nor total: for a few precious seconds it will be a broken annular.

As lunar mountains protrude onto the hairline-thin ring of the sun, it will be seen not as an unbroken ring but an irregular, changing, sparkling sequence of arcs, beads and diamonds very briefly encircling the moon: a “diamond necklace” effect!

What Cooper caught was more like a diamond ring, but man is it gorgeous! For more information or pictures from the exciting race across the Atlantic to capture the perfect eclipse photo, head over to Cooper’s website Launch Photography by clicking here.

Image credits: Photograph by Ben Cooper and used with permission.