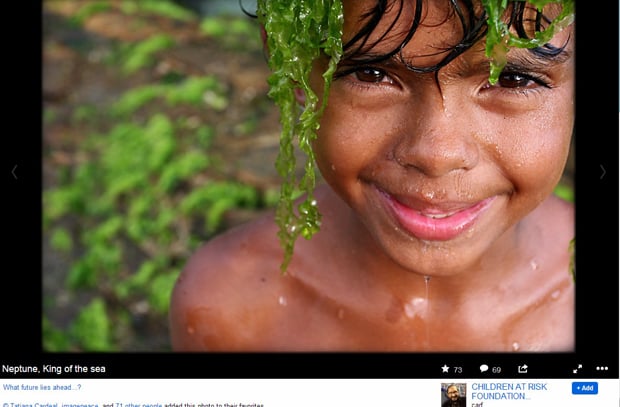 It’s one thing to swipe a photo and slap it on your website, and quite another to enter that stolen image into a high-profile photo contest passed off as your own work.

That is exactly what Mark Joseph Solis, a graduate student at the University of the Philippines, is discovering as he becomes a subject of international ridicule for winning several thousand dollars worth of prizes with a purloined portrait.

Last week, Solis was declared the winner of the Smiles of the World photo contest sponsored by the Chilean Embassy. He snagged $1,000 and roundtrip tickets from the Philippines to Chile and Brazil for a heartwarming image of a smiling Filipino boy with seaweed on his head.

Until, that is, Gregory J. Smith, founder of the Children at Risk Foundation, recognized the image as one he captured in 2006 and shared — all rights reserved — on Flickr. Smith immediately notified the embassy and suggested that the prize be re-awarded to his foundation: 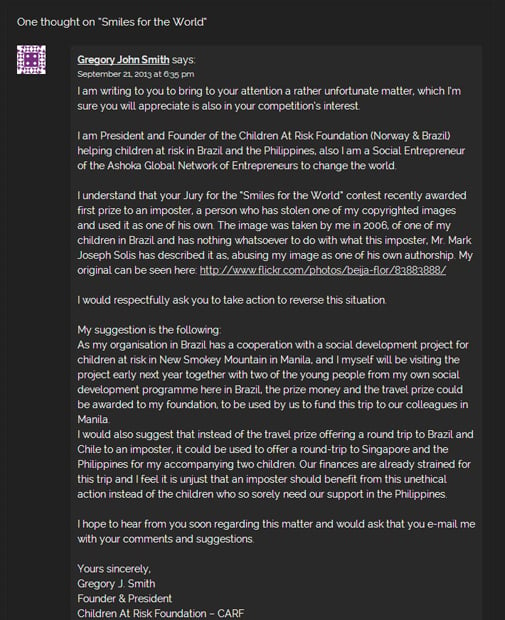 So far, what Smith has gotten is widespread expressions of shock and embarrassment (sample Flickr comment: “Mark Solis, If I were in your shoes, I wish I would be dead…”) and a letter of apology from Solis, who blamed the incident on “my youth, lack of experience, and the inability to see the repercussions of my actions.”

The Chilean Embassy revoked the prize from Solis, threatened to sue him and says it is re-evaluating submissions to re-award the prize.

Meanwhile, online sleuths have found numerous instances of Solis filching from Flickr to enter contests (one of which he won), including another contest where he entered the same photo that won the Chilean prize — with the subject in that case identified as Indian.

“The guy obviously has an insatiable appetite for infringing copyrighted material without any scruples,” Smith told GMA News. “I have taken note of his apologies and remorse, but I myself am a man of action, so I would like to see Solis translate his words into some solid action to benefit the children he has so irresponsibly abused.”

(via GMA News and Rappler)