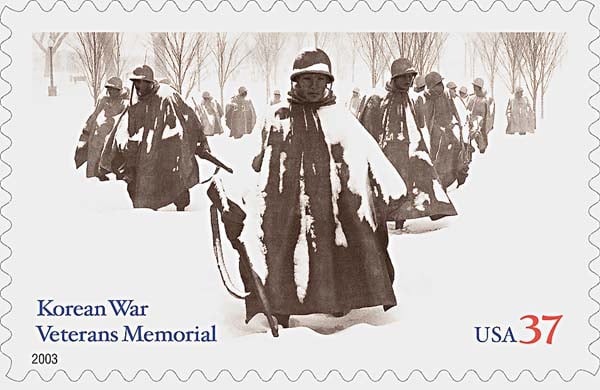 Be careful when photographing sculptures for commercial purposes — you could quickly find yourself on the losing end of a copyright infringement case and being forced to pay a lot of money.

This happened back in 2011, when photographer Mike Hipple was forced to pay up after shooting stock photos of a public art installation in Seattle. Now it has happened again: a court has ordered the United States Postal Service to pay a whopping $684,844 to sculptor Frank Gaylord for using a photograph of the Korean War Veterans Memorial on a stamp.


The stamp, shown above, shows some of the 19 soldier sculptures 88-year-old Gaylord created for the well-known memorial in Washington, D.C. — sculptures that were sculpted over five years for a fee of $775,000. The 37-cent piece was released to commemorate the 50th anniversary of the Korean War. Problem is, the Postal Service never asked Gaylord whether they could use images of the sculptures.

When Gaylord learned of the use, he sued the agency for copyright infringement. The courts decided late last week that Gaylord is entitled to $684,844 for damages — nearly $680,000 more than the largest stamp settlement ever paid in the past by the Postal Service ($5,000).

The case actually stretches back a ways: an original decision by the courts in 2008 ruled in the agency’s favor, stating that its use of the photograph was fair use. In 2010, the sculptor’s attorney was able to have that decision reversed, and this month courts decided to rule in Gaylords favor — big time.

USA Today reports that the sculptor also launched a lawsuit against Marine John Alli, the photographer behind the photo that was used. The two parties in that case came to a settlement rather quickly, with Alli agreeing to give Gaylord 10% of all future royalties generated by that photo.

This 10% royalty rate explains the $685K settlement — the courts decided on the amount after crunching numbers on how much the Postal Service had generated from its sales.

The Postal Service says it is currently deciding whether to appeal this damages decision.