While working on a feature film called The Grind, filmmaker Vashi Nedomansky had to come up with a way to shoot a flashback scene, complete with Humvee, in the desert of Iraq. The only problem? He had neither Iraq, nor a Humvee to work with.

Fortunately, he did have the sand dunes outside of Los Angeles and a 1:18 scale model of a Humvee purchased at Walmart for $23. Combine those things with a bit of creativity and you get some low-budget, professional-looking visual effects.

As Nedomansky explains on his blog, “In filmmaking, sometimes the simplest solution will be the cheapest, most realistic and easiest. This doesn’t happen often … but when it does, embrace it and enjoy it.”

That’s the situation he found himself in with this Humvee scene. Taking a leaf from Steven Spielberg’s book — Spielberg used this effect in the movie “Close Encounters of the Third Kind” when he made a 20-foot model look like a massive ship — he decided to use a model and forced perspective to try and get the shot he needed. 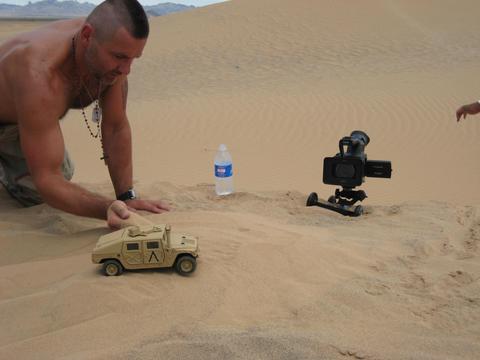 As you can see in the clip at the top, it turned out pretty well. On the technical side of things, Nedomansky used a Panasonic HVX-170 with a 1/3″ sensor at the widest lens setting and f/11. That meant that everything from about 1 foot in front of the camera to infinity should be in focus. He then placed the Humvee about 2 feet away, had the actors 40 feet away, and started filming.

Normally, a professional miniatures shot like this would take some serious time to set up, but as Nedomansky explains, you don’t always have that luxury. “We only had a couple of hours of good light and 4 pages of dialog to shoot,” writes Nedomansky, so instead of trying to figure out formulas and ratios, he “eyeballed the shot until it looked and felt right.”

To find out more about the setup for this scene, and hear about the experience from the man himself, be sure to head over to his website by clicking here.

Sony Springs Another Leak, We Get Our First Picture of the Upcoming Alpha 3000