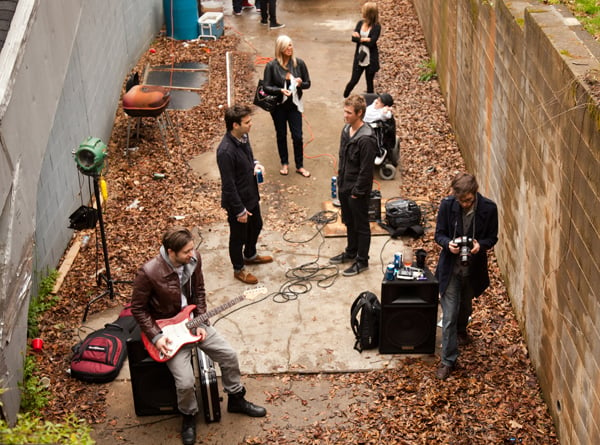 In my experience there seems to be a common misconception that shooting production photography and behind the scenes videos/documentaries are an easy task. While it’s true that these sometimes don’t require the normal spit and polish, photographers are used to, especially in terms of video work, I can assure you they’re no walk in the park.

As is the case any time you’re working around high level talent, or even low level talent for that matter, there’s still plenty that could go wrong. A lesson I quickly found out as I started shooting behind the scenes videos a few years ago.

If you ever get the opportunity to shoot a behind-the-scenes piece or work in production photography I highly recommend you try it. You’re likely to meet some fascinating people and get a rare glimpse into the creation process, be it movies, music, or what have you, that you’ve probably never seen before. I’ve primarily shot video pieces and thus this post will primarily focus on that aspect but most of this is easily applicable to production photography as well. 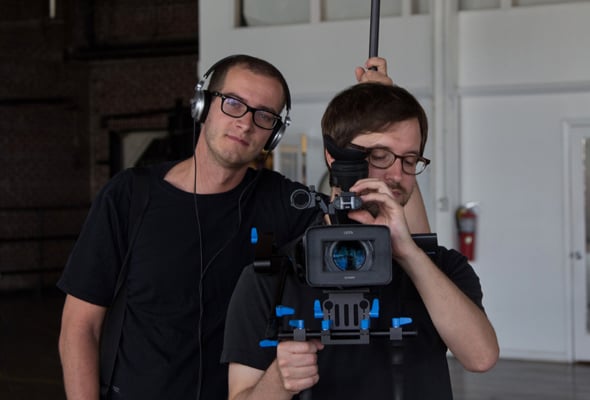 1. Know When to Be Invisible

I feel like a common mistake photographers make when shooting behind the scenes is trying to be too invisible to the talent. While it’s true that you don’t want the people you’re shooting to be too aware of your presence for fear that they’ll put on a show for the camera that feels fake you also don’t want boring footage/photos. So your best bet is to try and walk that line as closely as you can, where they’re still acting like themselves but also not performing for the camera. The best way to do this in my experience has been to try and build a rapport with them before you start shooting. Make them feel comfortable around you so that later when they see you filming or taking photos they feel like they can just be themselves.

A lot of people can be afraid of talent and thus will avoid talking to them but the truth of the matter is a lot of them aren’t used to having cameras invade this part of their process and they can feel like you’re spying on them. This can lead to the opposite effect of putting on a show for the cameras where instead they’re incredibly reserved, which in my opinion is actually worse. So try and talk to them a little bit before hand and try to do so as a regular person and not an awe-struck fan. Find some common interest unrelated to their profession and discuss that with them, it will go a long way toward making them feel comfortable with you around.

If you’re shooting video, another reason you’ll want to build a rapport with them is because at a certain point you’re going to want them to address the camera to discuss what they’re doing and why. A lot of people will do this in a formal interview session, shot before or after the process. While that works just fine I’m much more a fan of just pulling them aside and casually asking a few quick questions. I feel like you end up getting more honest answers that don’t feel like canned responses to planned interview questions.

Lastly, know when to set your camera down. Every once in a while a story will be brought up or an embarrassing moment will occur that’s clearly not for the cameras. If you stand there shooting it you’ll only make them uneasy later and you likely won’t be able to use it anyway. They’ll appreciate it when they see you respecting their privacy and it will pay off a lot more later when you’re shooting. 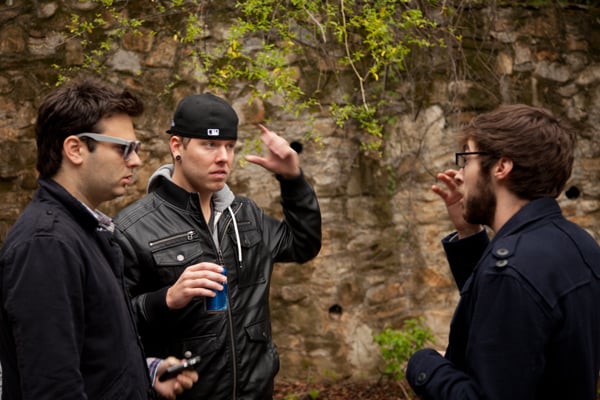 2. Be Ready to Move Fast

One of the biggest challenges of shooting behind the scenes is, everything is unpredictable. It’s not like shooting a narrative film or having a photo shoot where it’s all planned out. Instead you’re trying to capture intimate and honest moments, moments that can’t be predicted. If you’ve ever worked as a photojournalist this is where your skills will really come in handy as you almost always have to have your camera on and ready to go.

Often times I’ve found the best moments happen when you least expect them. You’ll have plenty of opportunities to capture the guitarist shredding through a song of the song or the actors on set performing through multiple takes, the real golden moments happen in between, when the director is talking to his/her actors or the musicians are discussing how to structure the song. 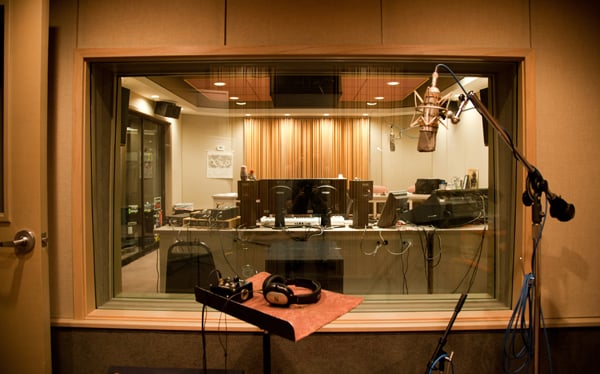 This is one that’s mostly for video. While face and action shots are the bread and butter of any behind the scenes piece what I found out early on is that you need to get a lot of coverage to help mask audio and video cuts. This means getting a lot of B-Roll. Interesting things around the space you’re shooting or even just shots of the talent’s back where you can’t tell if their mouth is moving or not. These are what will save you when you’re putting the final video together. 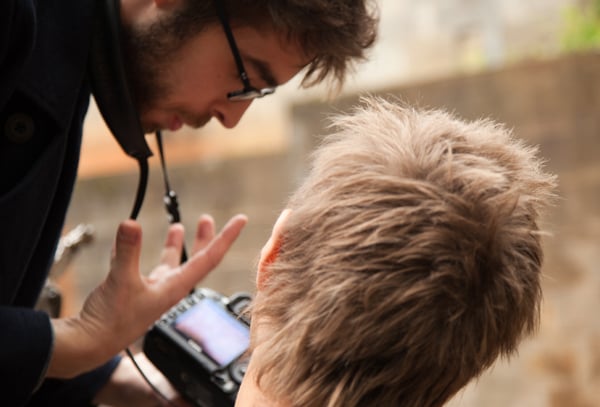 The glory of behind the scenes work is that the rough quality gives everything character and makes it feel more real. The trick here is to know what type of “rough” look is ok.

For instance when I first started shooting behind the scenes videos I deferred to my instincts, which unfortunately at the time was to shoot a little darker to maintain the crisp black color I loved so much. Then I would turn in my footage and the producer would complain about how dark everything was, a completely fair complaint. However in order to fix this issue I had to push my ISO far past what I would have ever been comfortable with on my own. I was shocked when I gave him my grainy, yet admittedly brighter, footage and he said it was exactly what he wanted. That’s when I learned what seems obvious now, it doesn’t matter if the footage is crisp if it’s so dark you can’t tell what’s happening. It’s much better to have that grain but be able to see the talent’s face and see what’s going on. 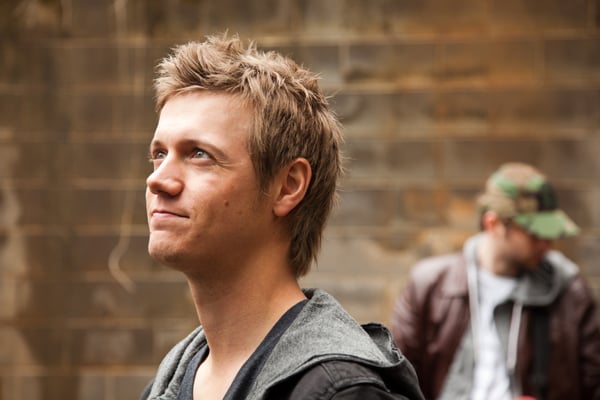 If you’re shooting production photography this one is obvious but if you’re shooting video it may be less so. In my experience shooting behind the scenes videos, a DSLR has been the most effective choice. The versatility of a DSLR to jump from stills to video alone is enough of a reason to choose it over standard video cameras, and trust me, even if you’re mainly shooting a video piece you’ll inevitably want a few high quality stills as well. But beyond that they’re small enough to be unobtrusive and work incredibly well in low light, something I’ve quickly found to be the biggest enemy while shooting behind the scenes.

Obviously this is another one that’s pretty exclusive to shooting video. The first few times I shot a behind the scenes piece I thought I nailed it. The whole session went well, I got a lot of shots of the talent in action, and the footage looked great. Then I would hand them off to an editor and they would end up struggling to get something put together that was interesting and cohesive. I couldn’t understand why this was happening.

Then I tried to edit a piece together and suddenly it was all clear. First off, it was ALL action shots, there was barely any B-Roll and nothing to mask edits with. Also I had been afraid to approach the talent for fear of annoying them or intruding on their process. I had pretty much made every mistake I mention above.

Then a session came up where I was unavailable to film and my good Dustin Chambers had to fill in for me. Coincidentally every editor was busy and I was left to edit Dustin’s footage. What you see above is the result and albeit short, it was easily the best learning experience I could have asked for. After editing his piece I went back and looked at my own footage and suddenly all my previous mistakes seemed so clear. I really can’t stress this enough, the fastest way to learn what mistakes you’re making is to try to edit your own behind the scene’s video, even if it’s not your job and will never be turned in to anybody.

Why Do We Want Better Cameras If We Keep Making the Photos Look Worse?