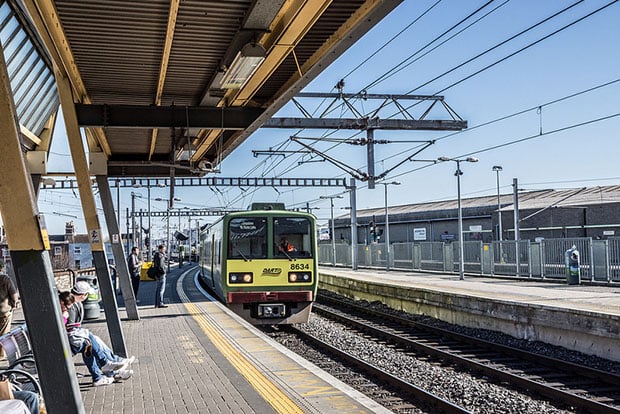 Yep, it happened. It really did…

I just recently finished a whirlwind Euro-trip traveling with my sisters. The itinerary was Germany (where I am currently living as a soldier with the incredible fortune to be stationed there) to London to Dublin to Paris to Barcelona and back to Germany.

We had just gotten off the plane from London and were catching the DART from Dublin city to Clontarf Road, where our hotel was located. I didn’t know the area, and instead of being my usual attentive self, my lethargy from traveling had made me slip up a bit — I didn’t recognize our stop until the train doors were opening.

Casually looking up to the sign to see where we were, “CLONTARF ROAD” on the track platform resulted in “Crap! This is our stop!”

We made it off the train without any issues and without causing delays thanks to having our stuff located right by the door and our seats right there as well. We surveyed the area and figured out which direction to take for about 2 seconds, but as soon as we were about to move out along the platform, it hit me…

“Where is my camera bag?”

I was traveling with a large hiking backpack that was my luggage bag and my Canon 200 EG camera backpack that was my cameras/lenses/snacks/flight papers/everything else carry-on bag. As such, I would walk with the large pack on my back and the little bag on my front, so the lack of the counterbalance in front threw me off.

And then it really hit me, despite my trying to hide my soldierly ways in front of my 12- and 14-year old sisters: “OH F***!” I drop my large pack and run to the train doors that I just strolled through on the way out, but they snap shut before I can reach them.

I run 2 meters down the train to the large window we looked out of from our seat, and then I see it: my camera bag casually lying on the seat with no one around it. And then the train starts to move…

I start running after the train along the edge of the platform despite having severely ripped tendons in both my ankles (the left was a rock climbing accident a couple of months ago that refuses to heal, and the right was the result of catching a loose rock while doing a sprint workout up the side of a hill). The adrenaline causes me to feel no pain in either ankle.

For some reason, I believe that I can somehow run faster than the train and reach the very front of it where the driver is and get him to stop the train. Oh, and I was sitting in the rear-most train car in a train of over 15 cars.

Finally, I stand there defeated, and watch the train race off into the distance before disappearing around a bend. Then it hits me! Run to the information desk and get them to contact someone on the train!

“Oh please let there be someone in there!” I say to myself as I run up the steps to cross to the other side of the tracks (of course it would be on the opposite side of the platform), because let’s face it: more often than not (at least in my experience), when you need someone at the information desk there’s no one there. But thankfully a heavily wrinkled (albeit young) man stood behind the counter.

“AGH! — TRAIN! — BAG! — MY!” I say between gasps. Completely confused, he stares at me for a few seconds, which I take as my cue to repeat myself in a lucid manner. “Sir, I left my bag on the train. It has all of my photography gear in it, as well as my and my family’s passports.”

That’s right, not only did my bag have my…

…in it, but also my and my two sisters’ passports. The holy grail of things to NEVER lose.

Eyes growing incredibly wide, he picks up the phone and calls someone. He explains the situation to the person on the other end of the phone when I hear him say “Don’t joke like that.”

He hangs up the phone and says, “There’s no one on the train other than the driver, and he can’t stop the train. You will have to wait for it to reach the end of the line and then have my guy at Howth (the final stop) check to see if it’s still there. I’m going to be completely honest with you: I don’t think it will be there. That train is passing through some really bad areas.”

And so the wait begins.

The phone rings, and I can’t hear what he is saying, nor can I read the emotions and expressions on his face through the glass. He puts the phone on his shoulder and asks me to describe everything in the bag, which I do in a level of detail that would befit the most meticulously planned of military operations. I give the names and dates of birth on the three passports. And then it comes — the smile.

“I don’t know how, but your bag has been found. Take the next train to Sutton (the stop before Howth), and see the guy behind the information desk.” He lets me get on the train for free, and let my sisters wait in the lounge with all of our luggage.

By now my adrenaline had subsided and my ankles are really starting to throb, but my excitement numbs the pain. After an agonizingly long 20-minute train ride, I get to the info desk and am ushered around the back to enter through the employee entrance.

“Would you like to look to see if everything is there?”

“Yes, please,” as I display my prepared ID card that would match the photo and name on my passport as proof of ownership.

I open it, go through every pocket, and not a single thing is missing. Not the photo gear, not the passports, nor the couple hundred Euros I had stashed in my passport for safe keeping so I wouldn’t have a lot of cash in my wallet. (And because I knew I would never lose my backpack.)

“Just curious, and without meaning to be rude, but can I ask how much everything in that bag is worth?” he asks me. Still staring down at my lenses hiding their smiles behind their caps, I slowly reply, “several thousand Euros.”

“You are a very lucky man. Three girls came right in and said that they watched you chase the train, and that they had found your bag. They held onto it for the entire train ride to make sure no one else took it and got off here on their way to the beach and turned it in to me. They said they also tried calling your hotel because you had the hotel printout in the bag, but apparently you hadn’t made it there yet.”

I saw those girls. I remember because they were all very pretty and were seated in the seats behind us. But they were very young, about 14, and starting their partying on the train as part of a larger group of about 15 kids. So you can imagine my shock to hear of their level of integrity.

“Where are they now?” I ask quickly.

“They are on the beach, but you won’t find them.”

I legitimately stood there and considered combing the beach for a solid 10 seconds, and then realized that I couldn’t leave my sisters by themselves any longer than necessary. Had I been entirely alone as I am used to traveling, I would have absolutely spent the entire day on the beach looking for them, but instead I left my contact information with the guy behind the desk and instructed him to keep a look out for them in the hopes they would get back to me.

I wanted to personally thank them, and take them out to dinner or even just offer them a substantial reward as a sincere, humble appreciation for not only saving me from a photographic meltdown (because I wouldn’t be able to recover from such a valuable loss), but more importantly for returning the passports. Yes, the photo gear was monetarily worth a substantial amount, but the loss of passports while traveling trumps that.

I remember vividly that while I was waiting at the train station, I prayed, despite not at all being a religious man. “Let everything be gone, let them swipe the camera and lenses, but I beg you to leave the passports.” Oh, and the military orders authorizing me to be on leave and exit Germany were in there as well.

Had the Irish girls on the train not had such integrity,

…I would never have taken this portrait of my sister. …I would never have woken up at 3 in the morning to go hiking and photograph the stunning Irish landscape at twilight. 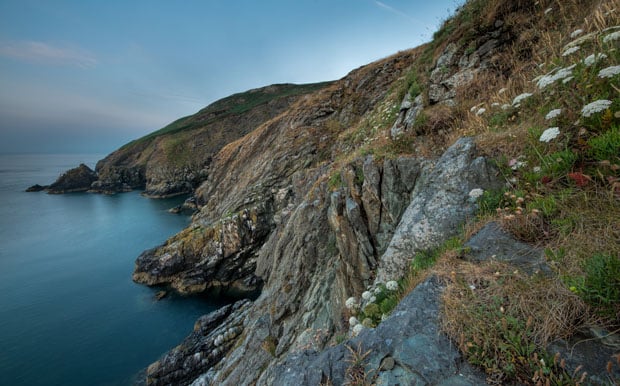 …I would never have taken this photo of my sister at Giant’s Causeway in Northern Ireland.

…I would never have taken this photo of Ballintoy Harbor, one of the most beautiful seaside villages I’ve ever seen. 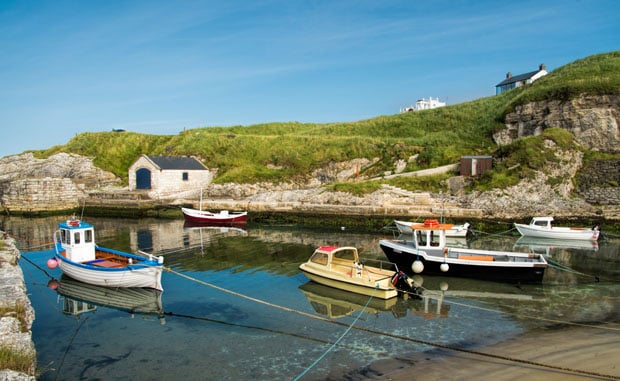 …I would never have taken this shot of the pyramid at the Louvre. 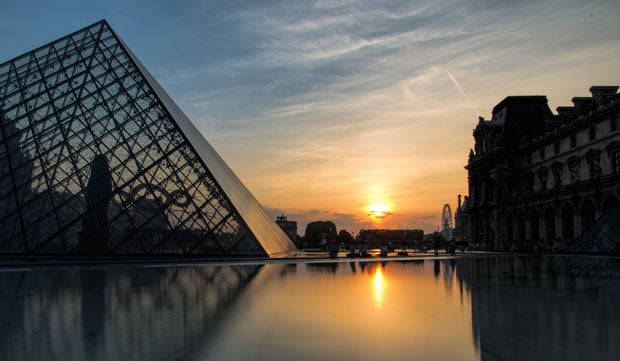 …I would never have been able to share photos of the first time the three of us ever saw the Eiffel Tower, which coincidentally happened to be on Bastille Day. 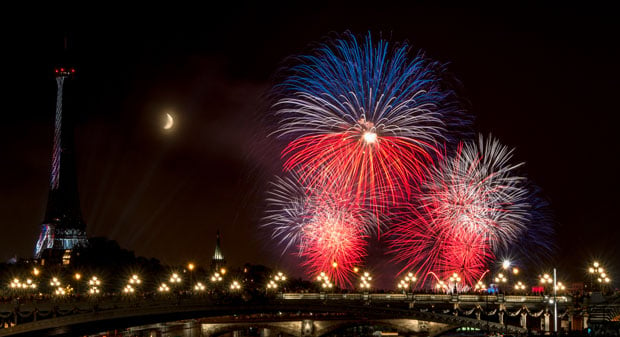 …I would never have been creative at the top of the Eiffel Tower. 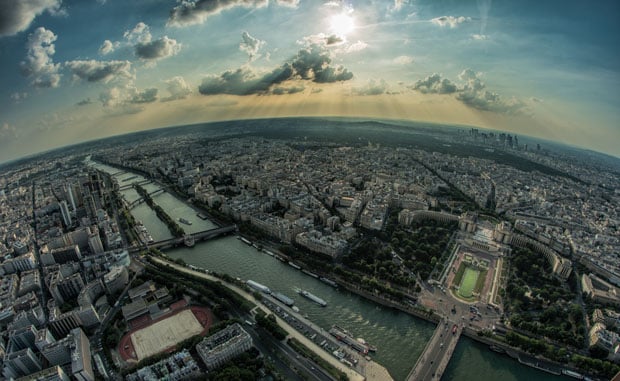 …we would never have spent over 30 minutes on this clichéd photograph, to include finally asking a random passerby to help position our hands and fire the shutter. 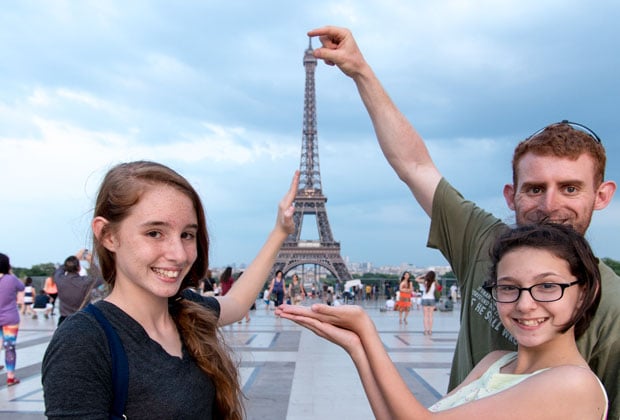 …I would never have taken this photo of the Plaza de Toros in Barcelona, which the three of us had all to ourselves. Now illegal in the region (not all of Spain), it has been relegated to a museum of a bygone era for Catalonia. I didn’t realize until after I took the photo that my youngest sister had run onto the sands and was charging like a bull. 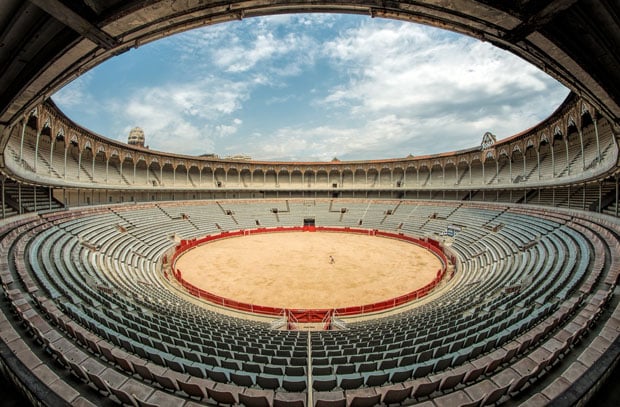 …I would never have taken off my shirt and instructed my sisters to reenact a bullfight.
I may not be Irish (despite my looks), but the Luck of the Irish was felt that day and for the remainder of our vacation. 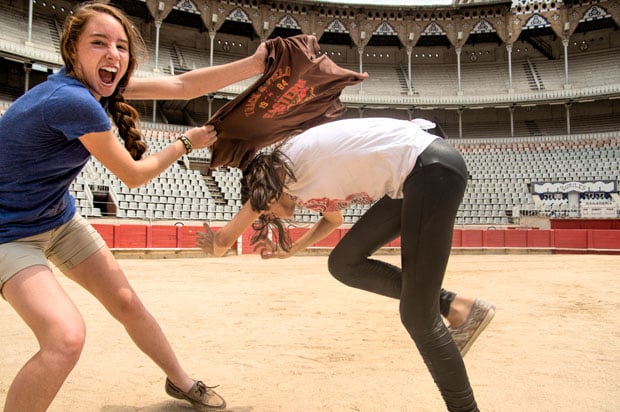 Since I returned I have contacted three different Dublin-based newspapers in hopes that they would run the story and the girls would discover it, but none of the newspapers have returned my emails from several weeks ago.

About the author: Alexander Jansen is a US Army officer and photography enthusiast who’s currently stationed in Bavaria, Germany. You can find his photography on his website. This article originally appeared here.

Image credit: Connolly Station – Dublin by infomatique, and all other photos by Alexander Jansen