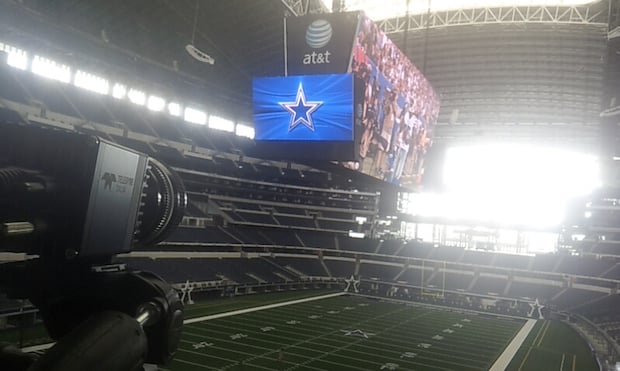 A couple of days ago, we shared the news that NBC’s Sunday Night Football was going to show you pro football like you’ve never seen it before: in bullet time. Details were a bit thin, but it looked like a 24-camera bullet time rig would be installed in each end zone, providing Matrix-like replays that would do their best to blow your mind.

As it turns out, the technology is called ‘freeD’ and was developed by Replay Technologies. And Patrick Myles of Teledyne DALSA (the company providing the 4K cameras for the system) got in touch with us to share some of the juicy details, which we now get to pass along to you.

First, for a few corrections. This system has actually already been deployed several times in the worlds of golf, gymnastics and baseball. Called “YESVIEW,” it was most recently available on the YES Network for Yankees home games. Check out this demo to see the freeD system in action in New York:

Also, the rigs will consist of 12 (not 24) 4K Teledyne DALSA Falcon2 CMOS cameras each, and will be placed around each teams red zone (not end zone). This means that from the 20-yard line in, NBC will be able to freeze any shot, move around it, and even zoom in quite a bit while maintaining an extremely clear picture.

“Replay’s freeD system utilizes powerful cameras and sophisticated algorithms to create three-dimensional photo-realistic real-time scenes,” explains Teledyne. “This information is stored as a freeD database that can produce (render) any desired viewing angle from the detailed information.” And that “rendering” is fast, taking only 30 seconds on average.

Here’s a quick overview that explains “how the magic happens,” so to speak:

As you might imagine, NBC is excited to get these rigs going: “Being able to seamlessly move from side to side and around an entire play without switching shots will entertain and inform the fans in Cowboys stadium and the National TV audience on NBC,” said Sunday Night Football producer Fred Gaudelli. “Fans will think they’re playing a video game or watching a Sci-Fi movie, but they’ll actually be viewing real NFL football as never presented before.”

So far, only the Dallas Cowboys stadium has the system installed, but Teledyne and Replay Technologies are confident that freeD will be adopted nationwide before long — especially once fans get ahold of the system on September 8th. For more information about how the system itself works, check out the short video above or visit Replay Technologies website here.