The folks over at NHK’s (the Japan Broadcasting Corporation’s) Science & Technology Research Laboratory have developed a groundbreaking multi-viewpoint, motion-controlled camera rig that could very soon be changing the way we view sports, among many other potential applications.

The rig is a robotically controlled system that links one camera to eight sub-cameras, all of which are pointing at the same thing. Basically, it’s a bullet time rig that moves, enabling the people behind the lenses to take the technique of timeslicing to new heights.

Each camera has two motors that allow it to pan and tilt, as well as lens technology that allows for zoom. The operator controls all of the sub-cameras from one main camera. If one tilts, so do the rest; if one zooms, so do the rest — you get the picture. 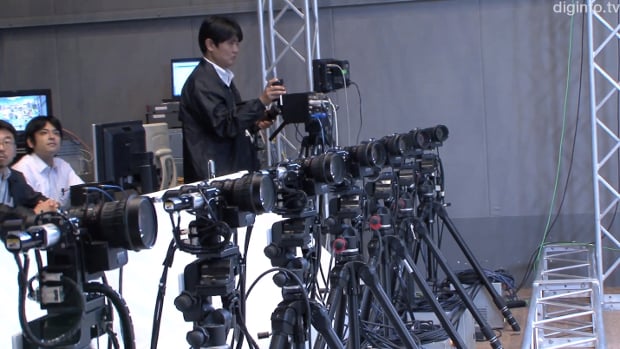 Speaking with DigInfo TV, an NHK spokesman expressed high hopes for the system:

Pictures from this system can be sent out about one minute after filming is finished. First of all, we intend to use this for live sports broadcasting. We’d like to make it easy to understand what’s happening, by providing multi-viewpoint pictures instead of the current slow-motion replay.

As you can see in the demo video at the top, the system already works very well. The idea that you’ll be seeing bullet time style replays shot by one of these rigs in the near future is not only possible, it’s likely.

Technology
action, bullettime, bullettimerig, camerarig, camerasystem, motion, robotic, sports, sportsphotography, timeslice
Related Articles
Discussion
Trending Articles
Mars Curiosity Rover Snaps Photo of ‘Doorway’ on Mars
May 16, 2022
Crocodile Dad Gives Over 100 Babies a Ride on His Back
May 15, 2022
Navy Fighter Jet Seen with ‘Shockwave Lines’ as It Nears Speed of Sound
May 16, 2022
The Science Behind Why Watches are Set to 10:10 in Advertising Photos
May 17, 2022
Astronaut Captures Lunar Eclipse from the International Space Station
May 17, 2022