It took 223 takes, 8 hard-boiled eggs, 5 microphones, 2 days and 1 camera, but Bob Boilen’s Tiny Desk — which is featured in the Boilen-created Tiny Desk Concert series on NPR Music — has officially been moved to NPR’s new headquarters.

Why did it take so much video? Because Boilen decided to film a Tiny Desk Concert featuring the band OK Go during the move, producing the above music/moving video in the process.

The band wound up playing an altered version of their song “All is Not Lost” off of their album Of the Blue Colour of the Sky hundreds of times before the move was done. They played in the back of a moving truck, in an elevator, while moving through hallways and more, all to put a whimsical and musical twist on the painful drudgery known as “moving.” 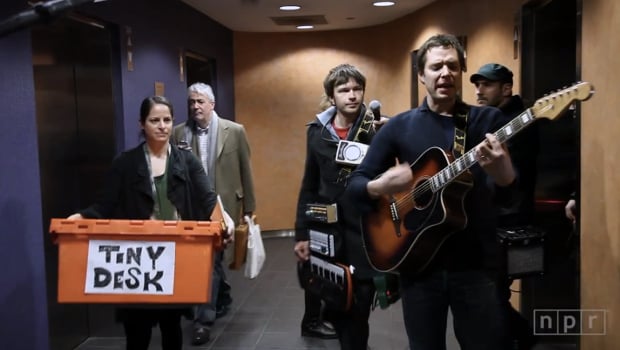 Boilen, who came up with the idea, explains how and why it came to him in the video’s description:

We needed to figure out the best possible way to move my Tiny Desk from NPR’s old headquarters to our new facility just north of the U.S. Capitol. We wanted to go out with a bang and arrive at our new space in style, so our thoughts naturally turned to a catchy pop band we love: OK Go, whose unforgettable videos have been viewed tens of millions of times on YouTube.

Bandleader Damian Kulash used to be an engineer at an NPR member station in Chicago, so we figured he’d be up for helping us execute a simple idea: Have OK Go start performing a Tiny Desk Concert at our old location, continue playing the same song while the furniture and shelving is loaded onto a truck, and finish the performance at our new home.

Boilen also breaks down the move into some entertaining numbers, such as the 8 hard-boiled eggs consumed (mostly by bassist Tim Nordwind) and the number of times (15) Ari Shapiro played the 300lbd tubular bells they had to cart around with them. Check out the video at the top, or read more about the whole experience (including all the relevant and irrelevant statistics) over at NPR Music.