Color film first burst onto the scene in 1935 when Kodak introduced the world to Kodachrome, and the first of this film that was available to the public was the 16mm variety for home movies. Later, Kodak introduced similar 8mm and 35mm film for home movies and photography, respectively, but it was the 16mm film that had finally offered consumers the ability to easily capture their world in color for the very first time.

The above video is a rare clip released by the Romano Archives that shows what French tourist Jean Vivier was able to capture using the 16mm film all the way back in 1939, when he came to visit the Big Apple. 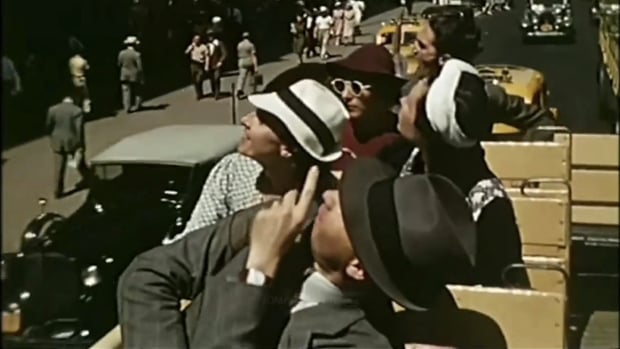 There are actually quite a few 16mm and 8mm color film reels from 1939 in New York City, most of them covering the 1939-40 New York World’s Fair. The Fair was a huge event that covered a massive 1,216 acres in total and gave attendees a look at “the world of tomorrow,” making it all that much more appropriate that it was covered in color.

What makes this particular video special — besides the fact that it doesn’t busy itself with the fair but rather the standard sight-seeing temptations of a tourist visiting New York at that time — is that it is in such phenomenal condition.

From the Empire State Building to the Rockefeller Center, check out the video at the top and catch a rare high-quality (and, supposedly, high definition) glimpse of New York City in the summer of 1939.

Tornado Chasers Getting “Too Close” In Their Hunt for Dramatic Imagery