This video recently uploaded to the web is making its rounds showing a mall security officer fiercely shouting at a group of curious citizens for taking pictures and videos. (Warning: It contains some violence and strong language)

The fiasco erupted after a semi truck plummeted into a ravine nearby the Ohio Valley Mall when a mall cop identifying herself as “Officer Adams” began demanding the onlookers discontinue taking pictures and erase the images. 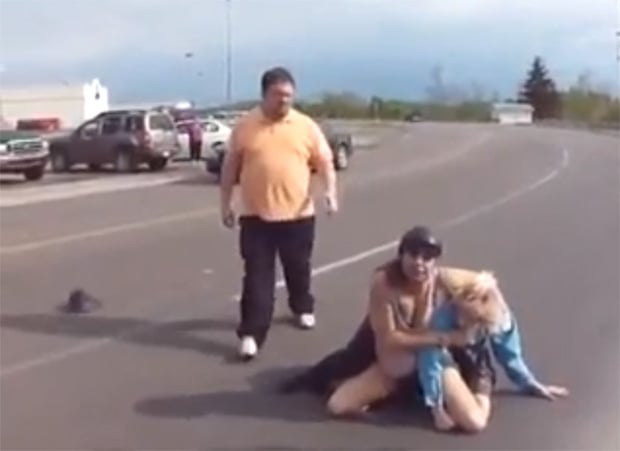 “Put the camera away and erase the pictures,” she shouted, also demanding the individuals leave what she called “mall property”. At one point, the officer threatened to take the onlookers’ cameras. The officer counts to ten with the expectation the onlookers would skedaddle, but when the time expires, she declares, “Guess what? I’m pressing charges on y’all.”

Things escalate quickly when the onlookers mostly ignore the security officer’s demands and question her authority. The officer eventually loses her cool and lays her hands on one woman in the group, at which point, a full-fledged brawl ensues. It takes the arrival of another citizen to finally defuse the situation.

Many shopping centers dictate that on-premise photography is strictly forbidden, but the subjects in the video seem more interested in what’s going on in the ravine below, which raises the question: what’s the big deal?

(via The Global Dispatch and PINAC)

Update: The mall cop has reportedly been fired from her job over this incident.