Adobe has made several announcements over the past few days. We’ve seen a new version of Photoshop, Creative Cloud bundles geared towards photographers, and even a go at hardware with the “Mighty” Pen and “Napoleon” Ruler. But of the unveilings, none was as controversial as the announcement that we would be saying goodbye to the Creative Suite line — from now on, it’s going to be Creative Cloud or nothing.

This has led to many a serious reaction and discussion online about the benefits and pitfalls of the new model. But of course, this is the Internet. What’s a serious discussion if it’s not balanced out by a good old fashioned meme? And so, YouTube’s Evil Edison has captioned Hitler’s fictional reaction to the announcement. Be forewarned: it is quite vulgar at times. 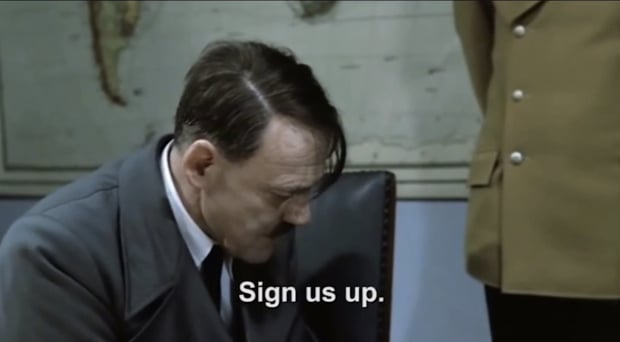 Silly as it might seem, the video brings up many interesting points against the Creative Cloud model. What happens if Adobe decides to jack up prices once CC is the only option? What if you can’t afford to lease your software during hard financial times? And what happens when you need to open an old file that is no longer compatible with the newest version?

For creative professionals whose livelihood depends on Adobe’s software, these are questions worth asking.

As you can see, even after his good long rant, Hitler ultimately gives up. Even though he intends to “tweet his rage until his fingers bleed” — a course many an upset customer might take — Hitler admits that “[Adobe’s] software is just too good.”

But what’s your take on the debate? Is Creative Cloud simply a future we’re having a hard time swallowing? Are you going to begrudgingly switch over? Or are you going to say “to heck with it” and start pirating the software? Let us know by logging your answer in the poll down below.

(via Evil Edison via Fstoppers)

How Photographers ‘Photoshopped’ Their Pictures Back in 1946