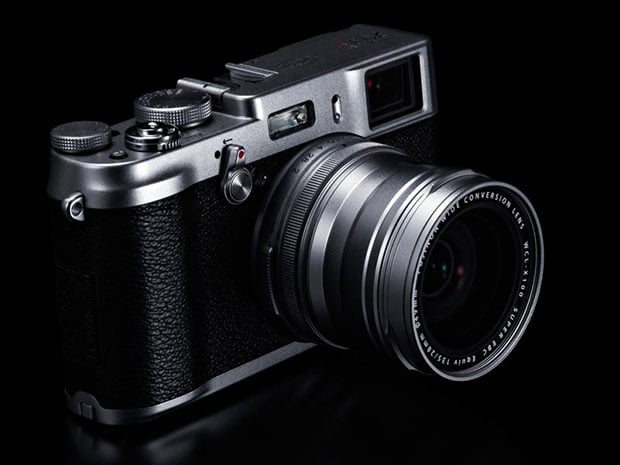 After reading the great reviews of the Fuji X100S, I decided to take the leap and buy one. I’ve been getting more interested in street photography lately, and this camera seemed like a good fit. Plus, it’s supposed to sync at all shutter speeds, which is great for flash photography outside in bright sun. David Hobby and Zack Arias both have nice in-depth reviews.

But, things are rarely perfect. It turns out that the X100S can’t sync at f/2 unless you’re at around 1/1000 or slower on the shutter. Nice, but still, I was curious why that is. So I decided to run some tests to figure it out.

Phantom to the Rescue

I used a high-speed video camera to watch the action of the shutter in relation to when the flash was fired. The setup is shown in the sketch below. The X100S sat on a table looking into the lens of a Phantom v1610 high-speed video camera, which was set to record at 40,000 frames/sec. A Canon 430EXII flash was connected to the X100S via an OCF cord. The flash was set to manual, and aimed such that a little of its light could be seen in the video.

The main purpose of the flash was just to add a timing mark to the video. Most of the light for the Phantom came from two LED flashlights (it has a really sensitive sensor). I know, a real strobist would have done a better job on the lighting, but I didn’t have a lot of time to play with it.

The video camera was set to trigger when the flash fired. So, when the shutter release was pressed on the Fuji, the flash fired, and the Phantom recorded the Fuji shutter motion. I made several recordings at various shutter speeds on the Fuji, all at f/2, no ND filter active.

What Happens at Slow Shutter Speeds

I’m not all that familiar with leaf shutters. But the video showed that the shutter opens when you press the shutter release partially down. I assume that when you press the shutter release the rest of the way down to take a picture it turns on the sensor to start the exposure. The leaf shutter then closes according to the shutter speed you have dialed in. Visually it looks like a fat pair of scissors closing with the pivot point of the blades down in the lower right corner of the lens when looking into the lens.

The video below shows what happens when the Fuji is set to a shutter speed of 1/125. The two bright spots at around 2 o’clock and 7 o’clock are reflections from the two flashlights. The other bright spots are various multiple reflections. When you watch this video you’ll see a bright flash at the beginning, which is the Canon flash firing. Then quite a while later (remember, we’re framing at 40,000 frames/sec), you’ll see the shutter blades closing.

The shutter starts to close at 1/145 of a second after the flash fires and is completely closed at 1/120 of a second. So that’s consistent with the 1/125 shutter speed that the camera was set to.

If you make a longer video recording (which I didn’t post here because of file size) what you see is that the shutter then stays closed for a while. Presumably the sensor is being read during that time. Then the shutter mechanism resets and the shutter opens up again. That whole process takes about 1/6 of a second, which explains the Fuji’s max burst speed of 6 frames/sec.

How Long Does it Take for the Shutter to Close?

The video above (and the other videos) showed the shutter takes 1.67ms to close, measured from the time that the shutter blades first appear to when they completely close. 1.67ms is 1/600 of a second. If it takes 1/600 of a second to close, then you can’t have a wide-open aperture at shutter speeds faster than 1/600. So it’s a bit of a stretch when Fuji says (on page 40 of the manual) that 1/1000 sec at f/2 is available. I guess they’re rounding up.

So in this case the shutter is closing during the entire exposure time. What that means is the effective aperture isn’t really f/2. I don’t know how the exposed area changes with time as the shutter blades are closing. I suppose it could be measured from the video. But, for example, if the exposed area is cut in half halfway through the exposure, you’d be at f/2.8 at that point. That’s a subtlety I hadn’t thought about until seeing the video.

Another factor to consider is the flash duration. In these tests I set the Canon flash to 1/64 power, where its t.1 time is close to 1/10,000 of a second. In that case, the flash is done firing well before the shutter closes, so all of the flash energy would be captured in the exposure. But if it were set to full power the t.1 time increases to about 1/350th of a second. So the flash wouldn’t have finished firing before the shutter is done closing, which means some loss of light. The good news is that the t.1 time is shorter than the shutter closing time for all power levels of 1/2 or less. This is likely true for other brands of speedlites as well (but studio strobes are a different matter). So at 1/1000, and slower, shutter speeds, most strobists should be reasonably happy campers.

The next video shows what happens at 1/4000, the fastest shutter speed available on the Fuji. The shutter is partially closed when the flash fires, again a necessity to accommodate the 1/600 sec required to close the shutter.

Of course the shutter is continuing to close during the exposure, and the flash is continuing to fire. So the effective aperture will end up being higher than f/2.8, and much of the flash energy could be lost, depending on the t.1 time.

For the Canon flash I used here, the t.1 time is shorter than 1/4000 for all power levels of 1/8 and lower. So if you can get by with 1/8 power on the flash, you won’t lose too much light. However, the aperture really isn’t f/2, so don’t expect the nice soft backgrounds you’d normally get from f/2.

About the author: Kevin Housen is a photographer who blogs at A Dash Point Photographer. This article originally appeared here.