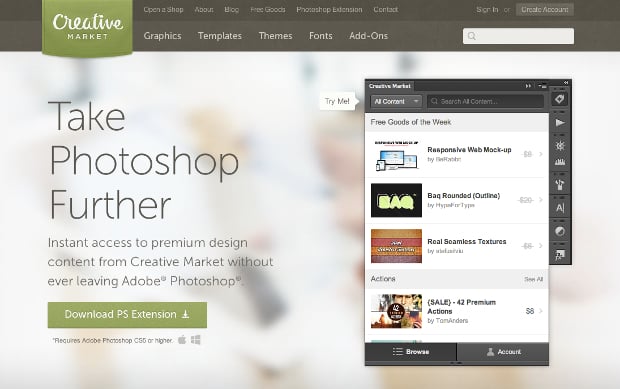 Following on the heels of a similar announcement by Adobe itself, design marketplace Creative Market has announced that it too has set up an in-app marketplace for Photoshop users. Out now, Creative Market’s Photoshop extension allows users to browse and buy from the company’s massive catalog of templates, fonts, infographics and more without ever leaving the comfort of Photoshop.

In an interview with TechCrunch, Creative Market co-founder and CEO Darius Monsef explained that the extension and upcoming API brings attention to an obvious but overlooked problem:

The hope, says Monsef, is to begin tapping into the market of 40 million Creative Suite users who spend $150 per year on average — that’s a 6 billion dollar opportunity on a silver platter … assuming people don’t use the Adobe Exchange extension instead, that is.

But the competition doesn’t seem to worry Monsef, who told TechCrunch that “[Adobe’s extension] doesn’t work as well as I think it could. I’ve tried using it and it’s very confusing and I think not nearly as elegant as what we’ve built.”

To download Creative Market’s PS extension and see if it really is as elegant as Monsef believes, head over to the company’s website by clicking here.

Nat Geo Photographer on Storytelling and Striving for Authenticity