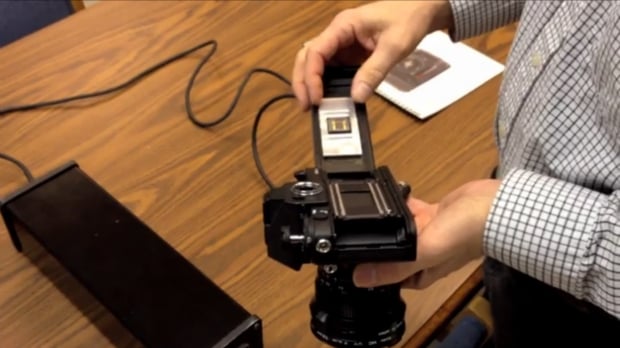 It’s ironic to the point of being tragic to think that one of the pioneers of digital camera technology was Kodak. Now bankrupt and licensing off their brand to mysterious companies, it’s easy to forget that it was Kodak that hit many of the initial milestones where digital imaging is concerned.


One of those milestones was the Kodak Tactical Camera, one of the first digital cameras ever made and very likely the oldest practical (read: semi-portable) digital camera in existence today. According to a fascinating article in the Democrat and Chronicle, however, we almost just lost this piece of camera history to a dumpster.

Made by inserting a Kodak sensor into a modified Canon film camera, the Tactical came attached to your very own ‘convenient’ shoebox memory unit. And using this set-up, you could capture a whopping 1MP black-and-white digital photo. Ok, fine, by todays standards it doesn’t really hold much of a candle to any type of imaging (digital or otherwise), but at the time this was groundbreaking stuff.

Historically, this camera sits very close to, if not at, the very root of the commercially available digital camera family tree. Only two Tacticals were ever built back in 1988, and although other digital cameras can claim the title of “first ever” digital camera, the others were either attached to a bona fide computer or digitizing videotape stills. 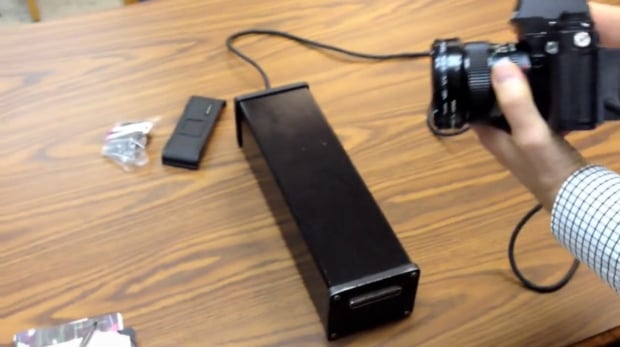 Sadly, historically significant as this camera is, it was only days away from the dumpster when Todd Gustavson of George Eastman House International Museum of Photography and Film tracked it down. Exelis Inc. bought Kodak’s remote imaging business some nine years ago, and were in the final stages of clearing out the building where this unit was on display.

According to former Kodak engineer James McGarvey, “They were literally two days away from the dumpster, it was lucky we caught it in time.”

The camera is still in the process of being fully restored, but once it is, they’ll take a photo with it and then retire it to a glass case where no dumpsters will threaten its existence. For more details on the hunt for this camera and a lot of interesting facts about digital photography’s first baby steps, be sure to check out the full Democrat and Chronicle feature here.

Educational, Equipment, News
camerahistory, digitalphotography, Kodak, photographyhistory
Related Articles
Discussion
Trending Articles
Mars Curiosity Rover Snaps Photo of ‘Doorway’ on Mars
May 16, 2022
Crocodile Dad Gives Over 100 Babies a Ride on His Back
May 15, 2022
Navy Fighter Jet Seen with ‘Shockwave Lines’ as It Nears Speed of Sound
May 16, 2022
China Accused of Covering Up Photo Evidence of the First Everest Ascent
May 16, 2022
Great Grey Owl Lands on Wildlife Photographer’s Camera
May 11, 2022