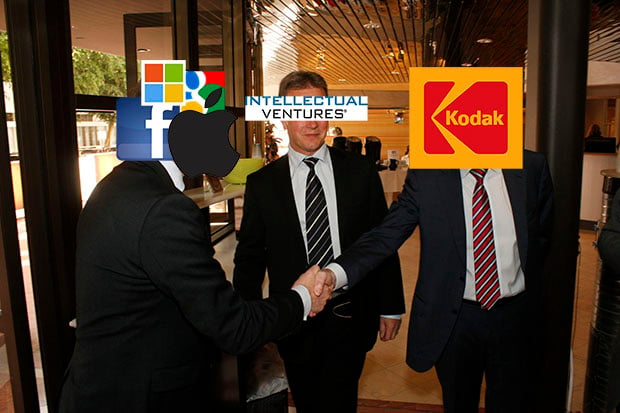 One chapter in the saga of Kodak’s escape from bankruptcy has come to an end. The company announced today that it has completed the sale of its valuable imaging patents for $525 million to a group of Silicon Valley companies. The deal involves more than 1,100 patents related to the capturing, manipulating, and sharing of digital photographs.


We reported on the bids earlier this month and pointed out that rivals Apple and Google were teaming up in order to acquire the portfolio.

Turns out that was only the tip of the iceberg. The list of companies participating in the purchase reads like a who’s who of tech giants: Apple, Google, Facebook, Samsung, RIM, Adobe, HTC, Fujifilm, Huawei, Amazon, Shutterfly, and Microsoft.

What’s more, those 12 licensees are being organized by IP-handling firms Intellectual Ventures and RPX. Recognize that first name? Yup: it’s the “patent troll” that has been going after camera companies recently, milking them for big bucks through patent infringement lawsuits.

Apple is an Intellectual Ventures client, while Google is under RPX. As part of this deal, Kodak is agreeing to give up its patent infringement cases against the buyers. You might remember that last year Kodak was trying to win $1 billion in a patent case against Apple, a case that was mostly dismissed by a judge just a couple of months later.

Although this sale leaves Kodak empty-handed in terms of digital imaging patents, the company is still loaded with patents related to other areas of its business. The company says it still holds roughly 9,600 patents after this monster sale.

Kodak recently secured a massive $830 million loan to help in its climb out of bankruptcy. One of the main prerequisites for that financing was that Kodak would have to sell its patents for at least half a billion dollars. Now that the sale has been completed, Kodak is free to move forward with its plans of conquering the world of commercial printing.