For the past three years, San Diego-based photographer Octavio Aburto has had a specific photo idea brewing in his mind. He wanted to photograph the incredible underwater tornado that forms when massive groups of fish congregate to reproduce. This past November, he finally got his photo opportunity while diving with his friend David at Cabo Pulmo National Park in Mexico. The beautiful 24-second video above shows what Aburto witnessed. 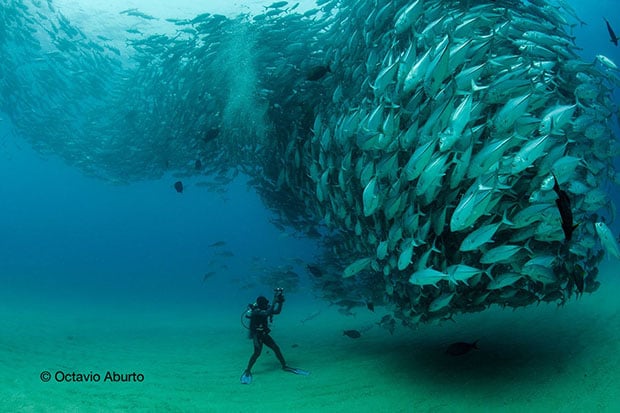 Aburto has submitted the photograph to National Geographic Photo Contest 2012. The photograph has also drummed up a good deal of attention after he shared it through Facebook.

Mission Blue has published a great interview with photographer. In response to a question regarding how the image came about, Aburto states,

The conditions were right — the water was very calm and the visibility was great. David and I actually had to stay in the water for almost an hour before we started photographing. We ended up swimming all over the place following the fish and waiting for them to start performing the courtship behavior. When the fish formed the tornado, David happened to be in this position filming this spectacular event.

What’s funny is that many viewers are having a hard time believing that the photograph is real. Aburto has been receiving emails from skeptics who wonder how he managed to get so many fish to form such a dense ball.