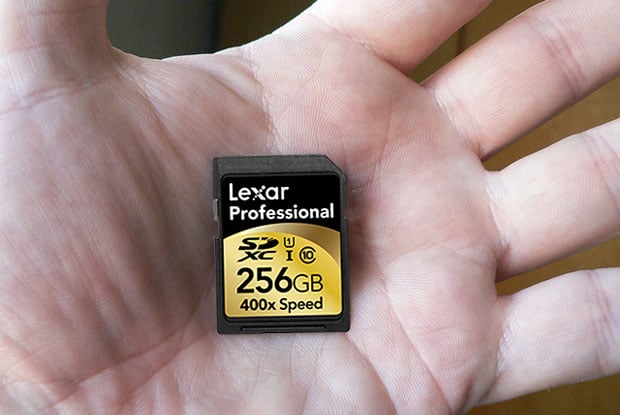 Professional photographers and videographers are being tapped to capture more HD video, in addition to still photos, when out on assignment. These new demands often leave them with less time and resources to shoot. High-performance, high-capacity cards like this one enables these photographers to gain back time normally wasted on changing cards or transferring images.

The card is a speedy one, offering a minimum guaranteed read speed of 60 megabytes per second — as long as you pair it with a just-as-speedy card reader. Still, to entirely read 262144MB off a completely full card, it’ll take at least 4369 seconds… or 1.2 hours. Got patience?

Unless you absolutely must have a ridiculous 256GB of storage inside your camera, there are two big reasons not to buy this card.

First off, as is commonly said, it’s not a good idea to put all your eggs in one basket. If you shoot an entire important event or job using this card, experiencing a card failure would be absolutely devastating. Lexar does state that the cards are extensively tested for compatibility and reliability using more than 800 cameras and devices, and they do offer a free copy of the data recovery program Image Rescue 4 with the card, but still… spread out your photos, man.

Basically, you’ll be paying a huge premium for the ability to consolidate your eggs. So unless egg consolidation is precisely the thing you’re going for, this card probably isn’t for you.

Still, it’s crazy how large memory card capacities are getting. Perhaps before long, we’ll have 64TB cards in our gigapixel cameras, and will be looking back on these 256GB cards like they were from the stone age.

Image credit: Composite photo created using Secure Digital card in hand by johnmuk. This is your brain on drugs … sub zero by TheeErin